LEWISTOWN, PA — With all the pomp and circumstance befitting a grand picture palace, the Embassy Theatre’s beautifully replicated marquee of 1,000 Lights came to life in front of a crowd of about 1,000 spectators, a larger crowd than the theatre itself could seat! The multi-colored sign was lit officially on October 16, in a ceremony to mark this important milestone in the theatre’s rebirth. While much work remains inside the theatre until it can be opened, the restored marquee is a visible reminder that the theatre will once again become a proud part of the community. 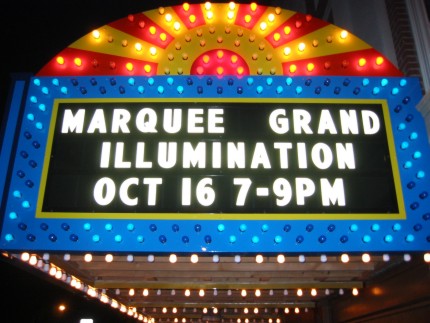 The festivities got underway at 7 pm, with a free concert by the Lewistown Community Band, playing a selection of movie and Broadway show tunes. Following words of congratulations by representatives of the Mifflin County Commissioners, Borough of Lewistown, Downtown Lewistown, Inc., and Metlmex Corporation (who built the marquee), the switch was thrown.

The honors for throwing the switch were offered to a man whom every Mifflin Countian who has gone to the movies in the last 50+ years would know Bob Hambright. Fifty-four years ago, Bob began his career as an usher in the Embassy Theatre. He later became manager of the Embassy and is still the manager of the only other theatre in the county, the Miller Theatre. Bob was thrilled beyond belief when he was asked to do the honors. He recalled how it was his job, those many years ago, to turn the original marquee on and off, to change light bulbs and the letterboards, and to grease the original mechanical controller.

The Embassy Theatre is located in Lewistown, Pennsylvania, a small rural town in the center of the state. What makes this theatre unusual is that its architecture is more typical of the large picture palaces, scaled down to small town size. The theatre was designed by Albert D. Hill, of Hodgens and Hill of Philadelphia, and opened to the public on October 17, 1927. The original marquee, which the new one replicates in every detail, was said to have been the most elaborate theatre marquee between Philadelphia and Pittsburgh. Over the years, the marquee deteriorated, and by the mid 1960s, it was largely non-functional. The Embassy closed in 1981, and ten years later, was purchased by the Friends of the Embassy Theatre, Inc. , a non-profit group working to restore the Embassy. Soon after, the original marquee was removed for safety concerns and examined for eventual replication.

The new marquee was a community effort, built right here in the community. Metlmex Corporation of Lewistown, a local custom metal fabricator, constructed the panels. Max Corkins Jr. owner of Corkins Auto Restoration, painted the panels with high quality automotive paint complete with a clear coat. Local electrical contractor Bob Lepley helped with the electrical components of the marquee. Metlmex, using a crane donated by Crider-Mitchell Construction, hung the marquee. Noerr’s Garage donated the use of a flatbed truck to haul the marquee to the theatre. A $40,000 Community Revitalization Grant, from State Senator Jake Corman, paid for the marquee in large part. Total cost is about $45,000.

For even more information on the ceremony, read the Lewistown Sentinel.

What a great trendsetter! So many cities now realize that the old marquees did add excitement and zip to the dark streets and wish they had not legislated them out of existance in the ‘60s. With today’s electronic animation allowing truly spectacular effects, we can only hope that more theatres will return their lights to brilliance (and I’m sure the electric sign shops agree with me!) It was also nice of Ross to post that photo rather than just a description; after all, a picture is worth a thousand words! For those interested in marquees in the grand manner of days past, the Theatre Historical Soc. of America has an entire ANNUAL on the subject titled: MARQUEES, and can be obtained through their web site at: www.HistoricTheatres.org on the sidebar link PUBLICATIONS&gt;ANNUAL. No color photos there (there was no color still photography back then) but still worth it for the dozens of b&w photos and drawings!

Thanks for this terrific photo goes to Brian Auman and Paul Fagley for sending it in.