See Where It All Began — in Chicago! 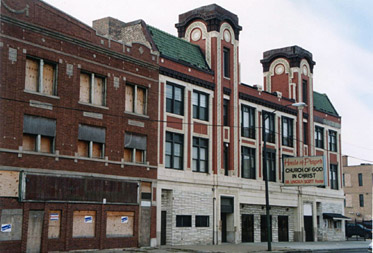 “Within Our Gates,” the famous 1919 silent film by Oscar Micheaux, will be screened at the historic Central Park Theatre in Chicago on Sunday, February 15, 2004. This will be the first film shown in the theater since 1971. The event begins at 3 p.m. at 3535 W. Roosevelt Road in Chicago’s West Side, Lawndale neighborhood.

Jay Warren will provide live musical photoplay accompaniment for the event. Theatre Historian Joseph R. DuciBella, ASID, will introduce the venue’s history. Rev. Dr. Lincoln Scott, pastor of the House of Prayer, will speak to his 33-year history with the building and the launch of a renovation effort.

OSCAR MICHEAUX is considered of the most influential African-American filmmakers. He was born in 1884 near Metropolis, Ill., one of 11 children. In his early life, he worked as a Pullman porter, and as a homesteader and farmer in South Dakota and northern Nebraska. He began to write novels at his home on the prairie, eventually forming his own publishing company. His novel, The Homesteader, was such a success that the Lincoln Film Company offered to make the story into a motion picture. When Micheaux refused to compromise his artistic standards in the film’s production, he formed the Micheaux Film and Book Company, which produced and distributed what was the first full-length feature film written and directed by an African-American. Micheaux went on to produce 27 silent and 16 talking films between 1919 and 1948, making him the most prolific African-American filmmaker of all time. Sadly, only three of his full-length films survive.

“WITHIN OUR GATES” (1919) was Micheaux’s response to Birth of a Nation (1915), D.W. Griffith’s controversial film on race relations. In Within Our Gates, Micheaux attacked the racism portrayed in Griffith’s film and reversed many of the scenes, using the same style of lighting, blocking, and settings. In a case of unfortunate timing, Within Our Gates was released right after the race riots, which plagued America during the summer of 1919. Theatre circuits feared further violence if the film was shown without editing the controversial scenes, and threatened not to run it in their theatres. However, Micheaux sidestepped the film industry bosses by renting theatres on his own and screening the full-length, unedited version to even bigger audiences.

THE Central Park Theatre “One of the most important extant theatres in Chicago,” according to Theatre Historical Society of America (Marquee magazine, Vol. 35, No. 1, 2003), the 1917 CENTRAL PARK is the first cinema presentation house of the wildly successful and popular Balaban and Katz entertainment corporation. It is also the first collaboration of Chicago showmen A.J. Balaban & Sam Katz and the Chicago architects C.W. and George L. Rapp. “In this theatre, Balaban & Katz first defined their style of presentation,” Marquee magazine states. “Its success gave rise to the beginnings of an entertainment empire which culminated in multiple movie palaces, market domination, and the successor organizations of Publix and Paramount.” Following the tremendous success of the CENTRAL PARK, Balaban & Katz built the RIVIERA, TIVOLI, CHICAGO, UPTOWN and other theatres to house their style of cinema presentation. After being a popular and profitable West Side cinema for decades, the CENTRAL PARK was fortunate to receive the congregation of the HOUSE PRAYER, CHURCH OF GOD IN CHRIST in 1971 under the leadership of Rev. Dr. Lincoln Scott.

THE HOUSE OF PRAYER is a Church of God in Christ sanctuary, which serves a variety of religious, and community needs for Chicago and its Lawndale neighborhood. Rev. Dr. Lincoln Scott and his congregation have owned and operated the venue since 1971 and have grown to include adjacent buildings to accommodate foodservice, counseling and transitional housing facilities, and to allow for the future growth of the church.

Rev. Dr. Lincoln Scott has been a pastor in Chicago since March 1959. A native of Arkansas City, Ark., Dr. Scott began the House of Prayer in two earlier West Side Chicago locations before giving a new life and name to the Balaban & Katz Central Park Theatre building in 1971. In addition to overseeing the activities of his Chicago ministry, Dr. Scott also travels widely to give motivational speeches and to participate in religious revivals and crusades. Recent venues included engagements in Alabama, Arkansas, Louisiana, and Mississippi. Also, the City Council of Chicago recently authorized its Commissioner of Transportation to designate West Roosevelt Road, from South Homan Avenue to South Central Park Avenue as “Reverend Dr. Lincoln Scott Road,” in recognition of Dr. Scott’s continued devotion to the work of improving people’s lives. Dr. Scott welcomes public interest in the history of the theatre/church building and is actively pursuing the resources needed to renovate it and adjacent properties. He has stated that he hopes the buildings can be improved so that they continue to serve the religious and community needs of Lawndale and Chicago for generations to come. Dr. Scott said his inspiration in life has been his wife, Clarola L. Scott, who married him in 1955 and who serves as director of Hope House. The couple has five children, 12 grandchildren and three great-grandchildren.

Joseph R. DuciBella, ASID, will introduce the venue’s history. A noted theatre historian, writer and founding member of Theatre Historical Society of America, Mr. DuciBella is a Chicago designer whose commercial clients include Classic Cinemas, a Chicago-area family operator of 12 theatres and 78 screens in 11 communities. One of Chicago’s best architecture and history tour guides, Mr. DuciBella is the featured host of the “Chicago Theatres” tour offered by Chicago Neighborhood Tours through the City of Chicago Office of Tourism. (View the Web site http://www.chgocitytours.com for more information.) He was most recently published in a chapter on Wicker Park (Chicago) nickelodeons and theatres in the book “Wicker Park: From 1673 thru 1929 and Walking Tour Guide” by Elaine A. Coorens.

Jay Warren – Chicago’s foremost silent photoplay organist, brings all the color, excitement, and glamour of the silent film era back to life with his original scores for the silver screen. As a regularly featured photoplay accompanist for the Silent Film Society of Chicago, he has accompanied most of the great silent films in his famous rousing style. He is featured annually for the SFSC’s highly regarded SILENT SUMMER Film Festival each summer at the Copernicus Center’s Gateway Theatre in Chicago. He is one of only a select few organists to accompany silent films at the University of Chicago’s Rockefeller Chapel. In 2002, Jay was chosen as the only theatre organist by the University of Chicago’s DOC Films to accompany a series of silent-era race films by African-American filmmakers.

THE SILENT FILM SOCIETY OF CHICAGO is dedicated to the preservation and proper presentation of silent films. With some 80 percent of all silent film prints gone forever, the Society’s goal is to heighten public awareness to expedite silent film preservation — by bringing the art form of the silent cinema into the forefront with the proper presentation — historically, technically, and artistically. In addition to this special screening at the former Central Park Theatre, now the House of Prayer, the Society’s ongoing projects include a field-trip program for grades 5 to 12 called Discovering the Silent Cinema in addition to its renowned SILENT SUMMER Film Festival. View http://www.silentfilmchicago.com for more.