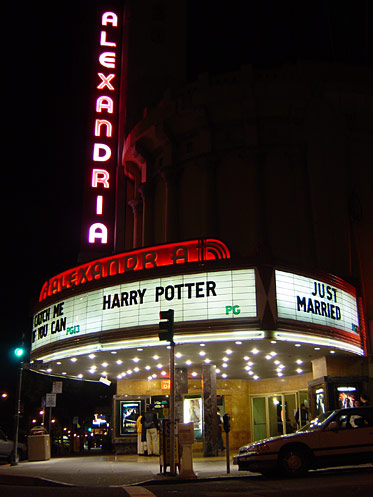 The group, dedicated to preserving and maintaining San Francisco’s wonderful neighborhood theaters, has been urging prospective buyers to continue operating the Alexandria, but the identity of the new owner remains unknown.

“The San Francisco Neighborhood Theater Foundation has learned that the Alexandria Theatre (Geary at 18th Ave.) could close as early as this Monday, February 16th.  Regal Entertainment has reportedly closed on a sale of the property to a group of investors represented by Patrick Lui of Coldwell Banker (2633 Ocean Ave., San Francisco).  The new owner’s plans for the Alexandria Theatre and the adjacent site are not known, but theatre employees have been notified that the theatre’s closing is imminent.

Unfortunately, the new owner of the Alexandria never contacted us to discuss their plans and Regal never made their identity known to us.  We hope to have the opportunity to meet with the new buyer soon to discuss their plans.  Hopefully we can work towards a development solution that will be compatible with the interests of the community.  Meanwhile, we wanted to be sure to let Theater Foundation members know that this weekend may be your final opportunity to see a film at the Alexandria Theatre.

The Alexandria Theatre was designed by the Reid Brothers and opened on November 26, 1923. It featured well over 1,000 seats when it opened and was one of the Richmond Districts most popular second-run film houses for much of the 20th century.  The Alexandria was built with an Egyptian theme, but subsequent remodellings took away from the building’s distinctive original style.  The theatre was converted into a triplex in 1976 and has remained in continuous operation as a first-run neighborhood theatre since then.  Deferred maintenance has left the Alexandria a bit tattered at the edges, but a hint of the theatre’s original grandeur remains evident in the lobby and downstairs auditorium."

I have been at this theater at least twice so my memories of The Alexandria will always be there. The decor & look of the main auditorium I thought as grand. Just the downside is location & parking. I hate to see a San Francisco Landmark to bite the dust. :(

Hello. I am writing a story on neighborhood theaters and their disappearance from the sf cityscape. If anyone was able to attend screenings on the final day of the Alexandria, I’d love to speak with them and get their feelings and a description of the atmosphere. I can be contacted by phone at 415-533-7822 or by email at I’d be happy to buy a drink for someone in exchange for answering a half a dozen or so questions.

So what’s the latest on this? I’ll drive by sometime this week and take a look to see if there are any signs etc.