Forest Theatre to Close on Thursday 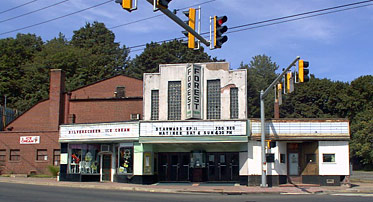 WEST HAVEN, CT — The Forest Theatre, one of the last remaining single screen movie theatres in Connecticut, is closing down for good this Thursday.

According to this article in the New Haven Register, the owner has become sick, possibly with multiple sclerosis, and cannot run the theater any longer.

He has apparently had the building up for sale for several years, but no one has come forward to buy it. He says that he expects when the theater is finally sold that the new owner will not run it as a cinema, but demolish it to make room for a new building. In recent years, plans to twin the cinema had to be scrapped due to the owner’s health problems.

I think that if renovated and twinned this cinema could be a viable location. It has a parking lot, which many old theaters lack. Also it would need to be programmed with a variety of movies each week. Currently they just show one film at multiple times per day. I think it would have more luck running multiple films one time each per day.

I hope someone saves this theater, but it does not look likely.

Spent many a Saturday at this theater in the late 40s early 50s. West Haven at one time had 5 plus a DriveIn,Rivoli,Cameo. Forest,Bowl Drive In and 2 others

What has become of the FOREST ???

what has become of this theater

the last time I drove by while visiting it was still there. I think it runs $1 movies but not positive.