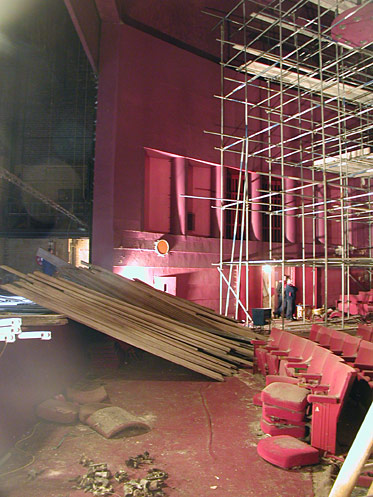 HUMBERSIDE, ENGLAND — Demolition of the former Regal/Cannon which should have been completed by now has been delayed because of bad weather.

Much of the interior has now been gutted — the photograph above was taken last December and shows the scaffolding in Screen 1 used to remove asbestos from the ceiling. Demolition of the rest of the theater commenced on Monday and the structure should be finally laid to rest within days.

So sad to see – even sadder when I returned to Hull and found the hideous shopping centre in it’s place. A wonderful Cinema – my first job, as a Trainee Assistant Manager. I saw The Beatles there, in November 1963, after queuing all night with school friends. ‘My Fair Lady’ was the film which greeted me into my new job. Loads of pop shows. Wonderful memories – including having marbles thrown at me, when I was on stage at the Minor’s Matinee….which mercifully failed to hit their intended target.

Interesting info was mentioned here on this forum about these delays due to weather and I had the curiosity of knowing about it. I am glad that I found Galileo Thermometers who gives more details about it. Now I can write about it and also give my analysis