SCARBOROUGH, ENGLAND — Ian Grundy, our intrepid UK Cinema Treasures volunteer, writes in with this update about the Royal Opera House. ()

“The demolition of the Royal Opera House, in Scarborough, North Yorkshire continues. Used mainly as a cinema from 1976 to 1996 when it closed and was willfully neglected, it is proving quite a strong construction to dismantle. As one member of the demolition team put it: ‘The roof was f***ed, but basically the building is very sound.’

It will be to Scarborough’s shame that the will and the money to restore this theater was not found. The attached picture was taken this afternoon about an hour ago (ain’t digital photography wonderful?)" 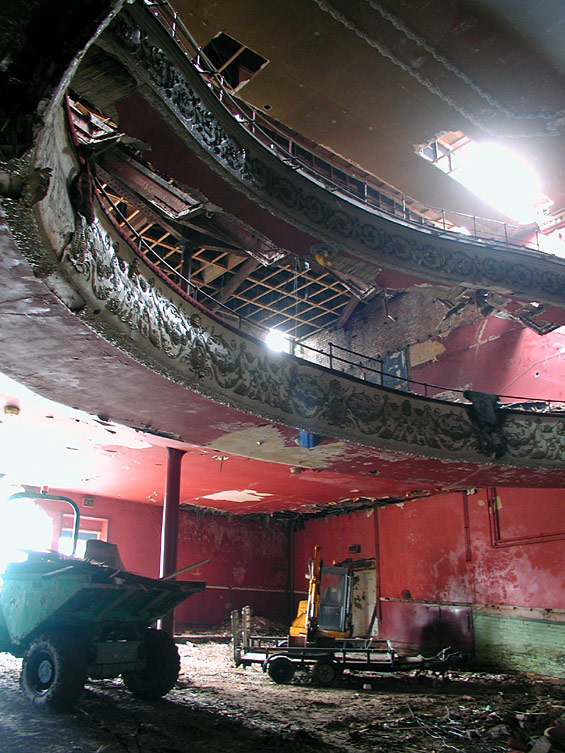 It still looks beautiful in is dilapidated state, what a shame they are demolishing it.

Disasters such as this were once ascribed to “Civic Indifference.” That sort of remark would have passed muster 30 years ago before innumerable studies and surveys proved that the preservation of an historic theater, no matter how seriously deteriorated, and thus how costly to save, more than paid for itself through increased shop business, healthier rents, increased trade from tourism and recapture of lost retail market share.

The truly tragic loss of this fine historic Opera House is evidence of cowardice and lack of vision on the part of at least a majority of Scarboroughâ€™s city officials. At any time, they could have stepped in and stopped the destruction. But they were afraid to take the responsibility for initiating any action.

Cowardice is a critical problem because it means that Scarboroughâ€™s city officials do not have the courage to step forward to direct imaginative projects when the opportunity presents itself. Afraid to act, they become re-actors to any situation. Since the middle name of any city is trouble, fearful officials are less than useless. They become a roadblock to any creative vision of the future.

Unfortunately, the demolition of a restorable historic venue, and the resulting loss to the larger business community in the improved retail trade it would have created is not Scarboroughâ€™s biggest problem. Official Cowardice is.
Gregory Hubbard, Kennebunk, Maine 04043 USA