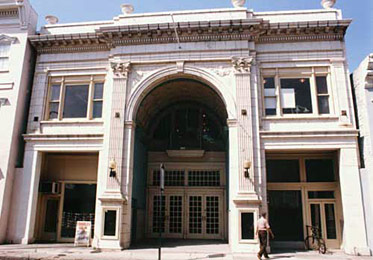 CHARLESTON, SC — Thank you to the Friends of the Garden Theater for your efforts to save the Garden as a theater. Thanks to Cinema Treasures for providing a place to post notices and news. Thanks to the many fine folks who responded to our posts.

The scheduled meeting for June 17, 2004, has been cancelled due to recent developments. Yesterday, we were told by workmen at the theater that the curtain, seats, and rigging have been donated to an opera company in Pennsylvania and the floor is soon to be leveled from the stage to the rear wall of the auditorium so that the space can be leased to a retail store.

The facade and much of the interior detail will remain but the days of the Garden as an active theater are over. There is much I could say about historic preservation, community identity, and personal courage but anyone involved with grass roots efforts to save a small local historic theater has already heard it or thought it.

So, I invite everyone to pour a glass of wine tonight and toast the glorious memories of their favorite theater. I’ll be raising my glass in honor of a fine old vaudeville and movie house that served generations in this community.

To the Garden Theater of Charleston, Cheers! You served us well.

Once again Mr. Coles, I am a fan of your efforts. I attended your library meeting and also went down the same path you fellas did. Your book does speak of a space that was a reverse movie house that was occupied by Leon’s. It is for lease. What is the story on that theatre’s history? Also I spoke with Demetre Jewelers and they said they have some early photographs of The Wonderland. Check it out and maybe post some photos on this sight.

The way I always go about it, you may have not saved it but you didn’t let it go without a fight.

Your positive viewpoint is to be commended. May you carry that forward with you always. I will toast the glorious memories!

Todd refers to a movie theater in Charleston that became Leon’s. I believe he refers to the Princess Theater which opened in 1913 at 304 King Street. This was a small narrow theater that had a five peice orchestra accompanying the films and entertaining between shows. It later became Leroy’s Jewelery store. Since my book was published, the jewelry store closed and much of the interior details of the Princess Theater were discovered above a drop ceiling. These details were beautifully restored and can now be seen again. The location is a now a restaurant.

I am interested in buying this theater and restoring it. Who would i contact? This is a serious inquiry. Email details asap to Thank you, everyone.

For those who are interested, there are photos of the Garden Theater taken last week showing the removal of the seats, curtain, rigging, etc. There is also an interesting shot of one of the old RCA projectors. The photos are at http://www.cofc.edu/~tiedjem/lowcountry_05.htm

Personally, I hate funeral photos, but it’s better than having no record of this sad event.

I was recently in Charleston and was not aware that this address on King Street had been a theatre until looking at the photo on this cinema site. The Riviera has been saved on King Street across from the Charleston Place Hotel though.

The Riviera closed permanently as a movie theater in 1983. The marquee still exists but the interior is completely changed. It is a conference center. It is a beautiful example of “adaptive re-use” but it is important to know this is not a “saved” movie theater. The only remaining movie theater in downtown Charleston, SC, is the American Theater, also on King Street. It has been converted into a “dinner and a movie” place and is no longer a single screen theater as it was when it opened in 1942.

Thanks John for the update on these SC theatres. I sure wish I had known about the Garden’s history when I was there as I would have spent time at that location as I did with the others on King Street!

That’s great. If you go into the lobby of the Riviera, they have on display, one of the original projectors. Also, there’s a great restaurant on King Street called The Majestic, in honor of the old Majestic Theater that was located next door. Their menu is all movie related. My favorite is the Godfather Combo.

John: Sure wish I had known this when we were in Charleston, but will return later this winter, I hope! And YES, I saw the original Simplex projector! What a nice surprise when we walked inside the lobby as I had only seen them, in photo prior to visiting the art deco Riviera. Also read the 2 plaques on the wall by the stairway with art deco railings that were from the Mayor of Charleston. A man by the name of Albert Knight bought the theatre to make sure it wouldn’t be closed or worse and eventually the theatre was restored though not as it once was, but still around for future generations to enjoy!

Thanks also for the website that shows the auditorium, etc. I truly appreciate seeing these photos and hopefully others in the future of the Garden since I didn’t realize it had been a theatre until after returning to NC and checking the cinema site photos! A Charleston lady did mention the Garden to me, but didn’t go into any detail otherwise I would have walked to the former theatre site and ‘paid my respects’! :–(

John, I’m writing from my island city of Alameda, in the San Francisco Bay area of California, where our mayor and city council have decided to do only a partial restoration of our historic theatre, and tack on a new 7-screen cineplex and a 6 story parking garage. Our city’s redevelopment project is grossly out of keeping with the scale of the surrounding businesses. All this to say — is it possible for you to shed some light on the demise of small theatres everywhere, when my strong impression is that people mourn their loss?

Evie: I’ve communiated via personal email with John and he has a vast theatre knowledge so he will be of help to you. And yes, your impression is correct that people do mourn their loss, but sometimes it is long after a particular theatre is gone, forever! This is why an effort should be made to save them before it is too late!

Small theatres continue to disappear around the world. They were built for a specific purpose and are difficult and expensive to adapt for other uses. Yes, some people mourn their loss. Those are the only people who might be vocal enough to halt a city administration working closely with a developer. Sadly, the effort fails more often that it succeeds. But, there have been some successes, so all you can do is try. You said “our mayor and city council have decided” and that sounds like the matter is not open to debate. Someone opposed to the plan must find others to form a group to make the mayor and council aware that there is substantial opposition. This must be done quickly. It is hard work and the only reward may be knowing that you have tried.

John: Thanks for offering your theatre knowledge, wisdom and advise. I recently came upon a name that was very instrumental in saving Chicago architecture, in general. That name is the late Richard Nickel. Several sites about this Chicago man can be found through google which include View link