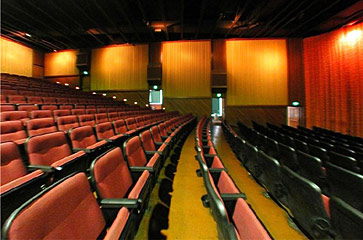 SALT LAKE CITY, UT — Westates Theatres closed the Trolley Corners Cinema after its final showings on June 3, 2004. The triplex theater will be gutted and replaced by a 24-hour fitness health club.

Although Trolley Corners was popular, it could not compete for first-run films with the new Megaplex 12 at the Gateway. Trolley Corners became a dollar house on September 5, 2003 — the only discount theater in Utah to feature stadium seating.

There are photos of the theater on utahtheaters.info website, and some better photos of Theater 1 will be coming out in the next month or so.

Please get intouch with me if the seating, curtains and rigging is availble for donating to a Theatre being restored.
Thank you, kindly