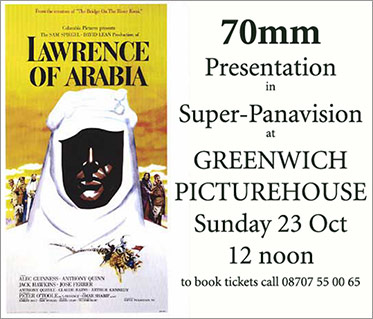 The screening is LAWRENCE OF ARABIA which will be presented in 70MM SUPER-PANAVISION. The projector used is a Philips DP70 which until recently was at the EMPIRE, Leicester Sq. This is one of three DP70’s that were installed on December 16 1959 for the opening of BEN-HUR. Considered to be the Rolls-Royce of projectors this machine (serial number 1352) has now been moved to a new home at the recently reopened Greenwich Picturehouse.

This DP70 was rescued from the Empire by Tony Jones, Creative Director of City Screen who operate the Picturehouse Arts circuit in the UK, to supplement a wide array of 70MM projection equipement already in regular use at its cinemas throughout the UK.

Initially I was excited about this until I read the cinema seats 175! Whats the point of 70mm in a space like that?

its a huge screen in a wide auditorium, the seating capacity was roughly halved to install extra large armchair reclining velvet seats and its got the most legroom of any cinema in the UK, so its still a great space to watch a film

Thanks Woody, What would you guess the actual screen size is?