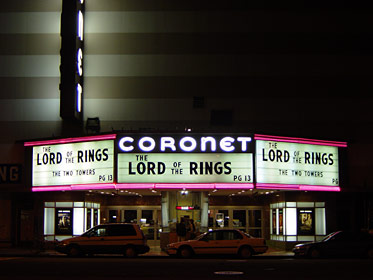 SAN FRANCISCO, CA — I just found out today (as I work in the film and advertising business) the following memo has been sent:

Please be advised the final day of operation for the UA Coronet 1 will be Thursday, March 17.

If you have any questions, please let me know.

Barbara, I have a question, I have been a projectionist for 49 years, I now live in Nashville Tennessee, and would love to work part time for your Company. How do I go about this? I have done installations, have rebuilt every projector ever made, and would like to be treated like a human being, I just quit Carmike, the place no one gets treated right.
Thank You
Dave Grau (Mungo)
Norelco

I thought the Coronet had closed on Feb. 10th?

Has there been any progress/news on trying to save the theater?

Given my history with United Artist and then Regal I would love to know how the Edwards Theatres are holding out. Jeffrey would you happen to have any insight on this question? R.E.G tends to treat UA and Edwards like two illegitimate child on opposite sides of the house. There is never any communication between the two.

Even though I loathed the merger of UA,Regal and Edwards the truth is that UA could not financially maintain many of the theatres that was ignored during the Merrill Lynch dynasty of United Artists Theatres. The stockholders milked and milked until the cow was jerky then put it out to pasture die. Most monies created by the theatre chain went to the ML stock holders and rarely to keeping up the theatres.

Once Regal bought out Edward’s and UA’s debts they touched up most theatres and gave them a far shot. A large number of the theatres didn’t even make the first round because they were in poor shape. Since Spring 2002 REG has given an almost costly attempt to keep these classic theatres going but ..sigh..the damage was inoperable.
Sadly enough this means that many of the UA theatres have gone dark.

It wasn’t a matter of Regal v/s UA, although at many times it felt like it. It come down to the fact it took UA 80 years and many theatres later to go into bankruptcy court whereas it only took Regal 15 years and a handful of theatres to do so.

Well the 17th has come and gone and not a word. Nothing on the local news and amazingly, nothing on this board. Anyone know anything?

Hello Friends and theatre lovers. Let it be known that I was the last civilian to walk through the exit doors of The City’s Greatest Theatre. We still have the Castro For Elegance and Style, but the love and loyalty of so many locals for the Coronet is unparalled.

Read it and weep. The Coronet is gone. Long live the Mighty Coronet.

I was planning on attending the last show at the Coronet, but got called at the last minute to do a projection gig downtown. Ironically while riding the bus there, I bumped into the Coronet’s projectionst, who is a friend of mine, as he was on his way to his last night at work. He’s worked there for over 20 years, so naturally was pretty bummed out. (We’d had lunch earlier in the week and he was not looking forward to Thursday!)

Later that night I passed the CORONET on the way home. It was less than 2 hours after the last show- – and already all the doors and windows were covered up and there wasn’t a light on anywyere in the place. I passed by there again around 5am this morning (Saturday) and a pack of homeless people had already set up living quarters under the marquee in front of the doorway. What a sorry ending for such a great theatre.

Very sad indeed, as well as any Thratre anywhere in the Country.
When they tore down the Warner in Pittsburgh, Pa. you would have thought I lost a very dear family member. I loved going to work there. I could not go near fifth ave. for a long time after that, was just to hard to bear.
Dave Grau (Mungo)
Norelco

I was there at the final movie of it’s career. Let me tell you, it was an eerie silence that proceeded the end of the movie. What was awesome is that the projectionist let people go through the projection room, and he really seemed to care about the place. That was cool.

The lobby was being stripped as we exited out, and only one news station was there KRON 4 beofre the final showing. Though I only went there twice, it was a unique experience I will not soon forget.

As some others have said before me, “Long Live the Coronet!”

Did you happen to notice the original 1949 theatre intercom telephone on the far wall of the booth? Last night somebody surprised me with it as a birthday gift as I was working at a projection booth elsewhere in The City. I have a colletion of old telephones and I also have 35mm projection at my house so I’m going to hang this artifact from the Coronet in “a place of honor” right near my 35 projector. The Coronet’s projection booth will be totally stripped by next week. I’m negotiating for a few more items.

Ironic tragedy!
I saw the first Star Wars movie on it’s opening day at the Coronet Theater. The jump to hyperspace was unheard of at that time (a little Mary/Jane helped) and the experience was one I will never forget. Now at 56 years of age, I have been looking forward to seeing the Last Star Wars adventure and thought I would see if it was showing at the Coronet.
I had taken the day off on the first movie and the theater was pretty much empty considering the space.
I have also taken the day off for this the last Star Wars also.
Some things just are not the same. To bad. Sometimes, moving forward, isn’t quite what you might expect.
Bummer! !

So, the Coronet is gone too! I long ago “abandoned” UA, SF, but I have bittersweet memories of all three. Going to the Coronet was a date! (and so was the Alexandria for that matter). Thanks to Cinema Treasures—our memories are preserved, even if the “fat Lady sang” at the Coronet! Tears!