CHARLESTON, SC — Mary Martin Gallery of Fine Art, located in the historic district of downtown Charleston, presents an exhibition of works by Hilarie Lambert entitled “The Theater Project.” The exhibition opens as a part of the French Quarter Art Walk on March 4th.

“The Riviera … The Palace … The Strand … The RKO .. The Paramount”: All are names evocative of the adventure and romance represented by the twentieth-century American icon, the movie theater" states Charleston artist Hilarie Lambert. 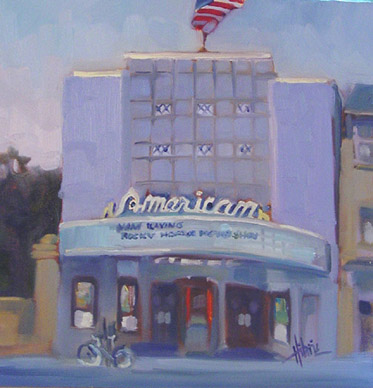 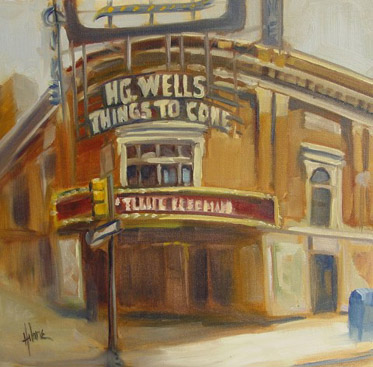 “I love painting en plein air — nothing compares to the natural light, and shadows you find out in the open. The idea that sparked my project to preserve movie theaters on canvas was the experience I had when doing plein air paintings of old theaters in South Carolina. People saw me set up on the street in front of the theaters with easel and oils, and begin to share with me things they remembered about the old theaters: the magic Saturday afternoons, "first dates”, the “special” showings such as Gone With the Wind, the fact that it was the only air conditioned place in town so the whole family went!"

This special connection between people and movie theaters encouraged Hilarie Lambert to travel to North Carolina, Philadelphia, Rochester, the Finger Lakes region, and Alabama to capture more of the old theaters before they disappear. The artist’s goal of the Movie Theater Project was to paint a series of historic old theaters that together truly represents an American icon. But, the most important to Hilarie is that each canvas would stand alone as a beautiful painting in itself — as well as part of the series.

A resident of Charleston, Lambert began painting as a child in the Finger Lakes area of New York State and developed a career as a graphic designer and illustrator for a major corporation. Her focus changed to painting after moving to Charleston, SC and joining the Charleston Artist Guild and COPA, the Charleston Outdoor Painters Association. Hilarie Lambert is a currently a member and coordinator for COPA, and a Signature Member of the Charleston Art Guild. Her work is displayed internationally in both private and corporate collections and has been featured in local publications including Skirt! Magazine, and chosen by Irvin-House Vineyards for Select Wine lables. 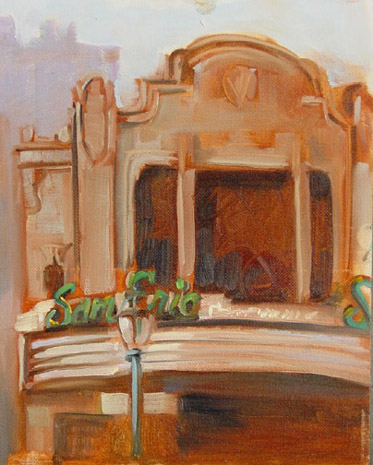 I clicked on the artist’s name and viewed Ms. Lambert’s entire theatre collection which includes the Garden Theatre on King Street in Charleston SC. This theatre’s future is uncertain so I hope someone can post an update on it.

I attended the opening reception of the “Theater Project” by Hilarie Lambert at the Mary Martin Gallery in Charleston last night. It was terrific! There were several paintings at the exhibition that are not represented on her web site. I was very attracted to one of a parade passing in front of the Riviere Theater. Anyone getting to Charleston in the near future should definately catch this gallery exhibition. Ms. Lambert captures so much more than the “appearance” of the theaters she has painted. Thanks to Ross Melnick for posting the news about this exhibition.

Guess the Garden Theatre is only on canvas now though. Such a shame as it has or had a beautiful front facade!