Where are they now? - Carthay Circle Theatre 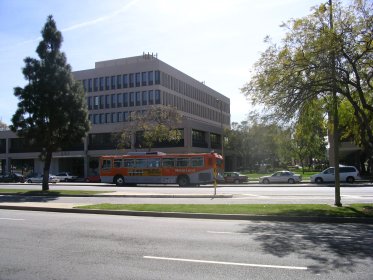 It’s so hard for me to look at this picture and not think about all those great memories I’ve had in that building. Walking down from Wilshire on those sunny days to bask in its hollow steel interior. Taking that orange bus over to revel in its magnificent architecture. One almost wonders what’s the holdup in getting a trendy restaurant to open up next store so you can hit two birds with the same stone. It makes sense. An urban slice of paradise? For sure.

Wait a second. I’ve never walked inside this building for pleasure. In fact, I don’t have a single positive memory of this place. In truth, no sadder sight exists on all the streets of Los Angeles. That ugly box-like monstrosity you see right there was built right over the ruins of arguably the city’s greatest showplace of all, the Carthay Circle Theatre.

It’s hard to grasp the extent of this theatre’s popularity with so many others stealing the spotlight in town. Maybe if the theaters still standing in Westwood, Hollywood, and Downtown didn’t exist, more attention would be given to this particular one. It didn’t take long for me to hear about it though. Ask anyone that’s been around Los Angeles longer than forty years what the greatest theater loss was and the answer undoubtedly turns to this. You have to understand that the Carthay Circle had significantly more world premieres than even Grauman’s Chinese. With the light atop beaming for miles, it cast quite a shadow in a town with more than one movie palace.

“The world’s greatest films were shown here before (being) released to other theaters,” longtime Carthay Circle neighborhood resident Elizabeth Polim said. “After a film had a long session at Carthay other theatres then were given an opportunity to show these films. Films selected for Cathay were (shown there for) the first time.”

Maybe the oddest part of its existence was its location. When the theatre opened in 1926, there really wasn’t much on San Vicente Boulevard. Even the major thoroughfare, Wilshire Boulevard, which was blocks away, showed few signs of becoming the booming business center it is today.

Fast forward to 1969 when the theatre came down for the new office building and the plot was still stuck in a residential neighborhood. Even today, it sticks out like a sore thumb. There are no restaurants or other office buildings on this portion of San Vicente Boulevard. Why would there be? “They can’t even rent the building,” another longtime Carthay resident, Bernice Kaufman said, referring to the surplus of open office space they constantly advertise. It almost seems like a cruel joke that something so beautiful could be torn down for such a stupid reason.

I subscribe to the theory that sometimes you need to think what’s best for the community instead of saving every single building. Sometimes, once you’ve exhausted all possibilities, maybe there is a better use for a piece of land than its present one. This is far from one of those cases. Whatever circumstances led to the Carthay Circle Theatre’s demise clearly weren’t well thought out by the evidence seen today. One of the most beautiful theaters in the world was lost forever and for nothing.

“The only permanent thing is change,” Kaufman said. “That’s what we’re left with, the memories.”

I just wish I had some of those memories of my own, too instead of being left with the buildings there today. I’m glad someone has them. 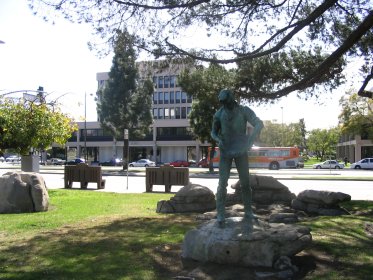 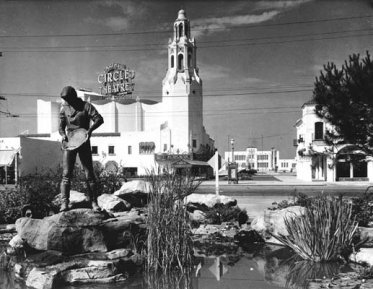 Thanks to the Carthay Circle Neighborhood Association, as well as their residents along with theater historian Tom Sutherland for all the assistance on this column.

Where was this theater and when did it close? Don’t remember it. I lived in California from 1995-2001.

It was at the corner of Crescent Heights and San Vicente. Demolished 1969.

I first came to Los Angeles in 1951 and was really awed when I drove by the Carthy Circle theatre. However, by the 50’s it was closed much of the time, it really was too out-of-the-way. It was used for legitimate stage presentions for a few years in the mid-fities, then came back in a big way when Michael Todd took it over and premiered “Around The World In 80 Days” there (the only time I was in the theatre). It really was a beauty, and a great loss to Los Angeles.

Another nifty article from Michael Z. He keeps us up coming back here.

I’ve often wondered about this place, but have very little visual reference. One of my movie theatre books has only old B&W photos that don’t really convey what the Carthay was like. Is there any good footate of the place, especially inside? Somebody must’ve shot a movie or tv show in there…

More pictures of the exterior and interior can be found at this website address:

A moving, tragic story. You’d think they didn’t know better in the late Sixties and Seventies, but sadly as we all know here, demolitions like these still happen today.

I sadly saw the ‘69 demolition. Like another poster on the Carthay Circle page on this website, I also grew up on Commodore Sloat Drive and went to Carthay Center School. An artist family (my profession as well) now lives our old house and their nephew painted a mural of the theatre on our old garage! Mr. & Mrs Green were our neighbors and owned an actual grocery store on the Carthay Theatre building. In the black and white photo above, you can see the edge of it to the left, behind Padilla’s gold miner statue. They had the best sandwiches there…sawdust on the floor of the deli…anyway, it makes me sick to see that horror of an insurance building that was forced into and onto that historic ground!