Man, I sure love ArcLight 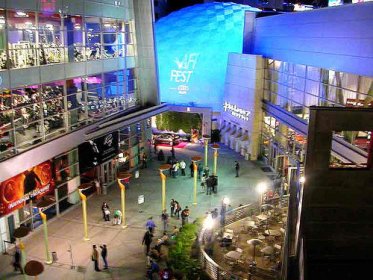 I’ve been harboring this little secret ever since writing for this site. Part of me thinks I might me labeled a heretic for even suggesting such a thing. Despite my love for the grand movie palaces of yesterday, my favorite place to see a film may just be ArcLight Cinemas.

For those not in the Hollywood area, let me bring you up to speed. ArcLight Cinemas is a luxury multiplex built five years ago in back of the historic Cinerama Dome on Sunset Boulevard. As opposed to other standard theaters thrown up today, ArcLight was created to incorporate many ideas that cater to a passionate audience.

For a couple extra dollars on weekends and virtually the same price as competing theaters during the week, you get reserved seating, no commercials, an introduction to the film by a member of the staff and an almost absurd amount of legroom and armrest space. They also at least attempt to typically show only the more desirable pictures in the marketplace, both small and big.

Compared with the glorious single screeners in the neighborhood though, I could see how some people would have issues with the interior aesthetics. Despite all their amenities, these are just your typical stadium seating theaters, with an added modern sleekness though.

Maybe they could have made more of an effort to include more ornamentation inside. Pacific Theatres(its owner) made a decision to emphasize comfort instead. With the success of the complex and the call to imitate it in other markets, you can’t help but think they made the right decision. If less and less people are going out to the movies, maybe the best strategy to get people back in is to create an environment as cozy as home as possible? ArcLight is living proof of that mantra for sure.

Don’t get me wrong. There’s nothing like going to a classic theater. Especially for a big film, I’d never trade the experience. I like to visit them sparingly though to make each time an event. Sometimes I just don’t want an event. I just want to go to the movies. When it comes to that, no place to me provides a more superior experience in that category than ArcLight. I mean, come on. Anyplace that charges a reduced price for children yet full price for infants must be something right.

(Thanks to chotda for providing the photo.)

There are so many good multiplexes as well as small theaters i like going to all kinds of theaters ,as long as there well run!

I was afraid this would happen. Moving away from classic cinemas to embracing multiplexes. I saw it happen with a popular industry-based movie theater magazine and now it’s happening here. Now they barely mention the older theaters except to announce their closings.

WHAT? WERE DID THAT COME FROM TIM?? I love old theaters and new multiplex as well …. No need for one or the other!

I wish New York City had creative solutions like ArcLight — and I wish the classic movie theaters in Manhattan and elsewhere in the city would stop being demolished. It’s always seemed to me that rather than eliminate a gracious old theater or dividing it into an awkward multiscreener, it could be physically expanded with additional auditoriums (perhaps a bit like Arclight with its “luxury” features), adjacent to the original (as is the case with Arclight in Hollywood) or above (or below) the original. This would generate more revenue and such an expansion would not be all that unusual in this city of skyscrapers. But the theater industry in this city doesn’t seem to grasp that concept for some reason. Many theaters could’ve been saved and well-utilized in this way.

Michael is right. My family operates a classic cinema in Illinois and once a year we travel to the west coast to visit theatres and get new ideas for our theatre. The Arclight is heads and tails above any other theatre complex in the country and proof of this is in their success. They are so popular now that they are going to open several more complexes with the same philosophy. Two weeks ago I was in L.A. and went to Cinema Deluxe The Bridge. They touted themselves as the future of moviegoing. It was a miserable experience. Dirty and impersonal…yet expensive. I wrote a letter detailing this experience to their corporate office and have yet to receive a response.

When plans to surround the Cinerama Dome with a multiplex were announced, I cringed. Well, fortunately time has proven me wrong. The Arclight complex is simply fabulous. And, most important, we still have the Dome.

Cinemaro, that’s exactly what was done at the Somerville Theatre. They retained and restored the original theatre, then added four additional screens in other parts of the building formerly used for retail or office space.

Hey Tim…there IS a classic theatre in front of this multiplex. Or did you read the entire article? :o)

Chris,
I read the article. Michael is not referring to the classic theater in front with this statement, “Thereâ€™s nothing like going to a classic theater. Especially for a big film, Iâ€™d never trade the experience. I like to visit them sparingly though to make each time an event. Sometimes I just donâ€™t want an event. I just want to go to the movies.” By embracing these multiplexes in even the smallest way and visiting classic theaters ‘sparingly’ is counterproductive to the many classic theaters fighting to survive in today’s market. I thought Cinema Treasures was all about encouraging support for the old time theaters still in existence. The multiplexes do well enough on their own without anymore help.

I’ve read Michael’s other articles and he’s doing a fine job. This just struck a nerve with me being the owner of a classic movie theater myself.

Tim,
Speaking as a classic theatre owner myself, I do not mind that the multiplexes are out there. I find that I can set myself apart very easily from their:
high price
impersonal service
commercial infested presentation
sticky floors
rude patrons
If I do my job right, people flock to my theatre weekly for the unique experience. Those multiplexex are, whether we like it or not, the financial backbone of the exhibition industry which keeps the flow of product coming.

Tim O'Connor and jnjeisen: you’ve both made some good points.

The multiplex cinemas have become a staple of the American movie experience and they’re also where the money is…that’s true. However, jnjeisen, the reasons that you point out above are what have turned a great many people (myself included) to going to these multiplexes. More to the point, the multiplex cinemas, with rare exceptions, often tend to play much schlockier films

Regarding rude, cellphone using patrons, sticky floors, etc., I have found these to be considerably less of a problem in a true-blue movie palace than in the multiplex cinemas.

Tim: I also agree with your points about embracing the multiplex cinemas being counterproductive to the classic movie palaces trying to stay afloat in today’s market, and about this site’s helping to preserve these great movie palaces.

I think we lost so much once we stated going past four screens.After that it was run them in and out.At the two single screens i worked at you had time to chat with the moviegoers.That is no more and why I stay away from those monsters.