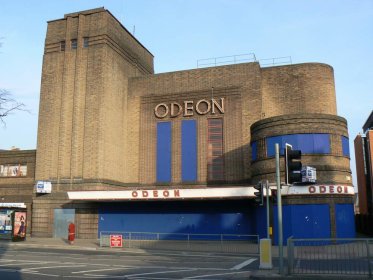 YORK, ENGLAND — It has been announced today that the former Odeon Cinema, in York, which closed last August after 69 years, will reopen under the ownership of Reel Cinemas, a company that is bringing the whole movie-going experience back to the cinema.

After months of silence, the company has taken over the lease of the Art Deco, Blossom Street landmark, which is the city’s last remaining pre-war picture house.

The company are hoping that after an intial cleanup the cinema could reopen as soon as August. After that a major refurbishment will take place to create a 5 screen complex with original art deco features being restored. The complex will remain open during this time apart from perhaps the occassional day or week. Managing director Mr Kailash Suri said he was confident that there would be sufficient custom for the cinema, despite there being a multi-screen complex and arts cinemas elsewhere in the city.

This is fantastic news for all the campaigners, myself included that fought a 3 year battle to prevent the cinema being closed by the Odeon company. Over that time, the cinema was allowed to deteriorate to such an extent that there was broken seating, bare light bulbs on the ceiling and toilet facilities like something from a horror film.

We even had celebrity support from Dame Judi Dench, who was born and raised in York, and who had memories of visiting the cinema when she was younger.

It is hoped that subdivision work on the largest auditorium, to create 2 screens will not destroy original features but that they will preserved. However, as the new owners have been discussing the plans with the local council and conservation body English Heritage this hopefully will not be an issue.

I personally hope that this will include the uncovering of a fabulous figural mural of historic characters and a 1930’s film crew which has been hidden above a false ceiling for over 40 years.

We hear a lot in England about older cinemas closing and being demolished so it is heartening to hear that there is still a cinema company around that cares about the buildings from the hey-day in cinema-going and want to preserve these icons of architecture.

(Thanks to Tim Addyman for providing the photo.)

I guess that implies that most cinemas were bombed by the Germans during World War II?

hah? so if I inform you that the Boyd Theatre is downtown Philadelphia’s last surviving pre-war movie palace, then you’d conclude the others were bombed by the Germans during World War II rather than lost due to TV, suburbs, multiplexes, etc?

What I meant was that all other pre-war cinemas (York used to have 10 at one time) closed or were to put to other uses.

Of course you did. That’s the same story worldwide. A quick google search doesn’t reveal other York cinemas listed at cinematreasures.org. If you know any details (names, style, year built, year closed, what they are now) about them, feel free to list them, even if only here in reply. Movie theater fans visiting York may want to glance at a building and realize what it was.

I look forward to hearing in the future about the renovation of the Odeon York! if possible, you might to telephone the new company, or the town authorities, to inquire about the mural. Even if they know about it, lobbying by individual citizens could result in it being un-hidden.

There’s only a couple of others on cinematreasures, The Rialto, demolished 2003 and the city’s first purpose built cinema The Scala/formerly Electric which is now well preserved as a furniture retailers (both posted by Ian Grundy).
I’ll definately keep visitors updated about the developments and I am in the process of contacting the new owners with a view to offering any help I can. This is a once-in-a-lifetime opportunity and every effort needs to be made to ensure that its a success from day 1.
I’ll also be lobbying for the mural to be revealed in all its 1937 glory.

Full credit must go to Reel Cinemas for having the ba**s to have a go where the once mighty Odeon group failed. I wish them and all concerned the best of luck. Again there is a reason to visit York, well other than than to see the beautiful City, itself!

A lot of theatres have certainly closed. But my impression is that London was attacked extensively during the war. So I though there might be a different history here. Thank you for answering my question.

No problem. York was bombed in the war on the night of April 28th 1942, the main target being the cities railway station, as York was a major railway city. The only cinema to be affected by this bombing was the Tower in New Street close to the river, which was hit by an incendiary device which destroyed part of the roof and balcony. The cinema closed for 2 months whilst debris was cleared from the building and temporary repairs were made. It reopened and carried on till 1966 when it was sold and demolished for a shopping arcade.
The Odeon was one of three cinemas opened in 1937. The Regal, another super cinema was opened by the ABC circuit and survived until the late 1980’s when it was demolished for a shopping centre and The Clifton was a small suburban picture house which still survives as a bingo hall.

Am very pleased to hear about Reel Cinemas' acquisition of the Odeon York. Hope it all goes well and that the remaining original features are uncovered and restored sympathetically.

I don’t know much about it, but I would have thought that since York is quite a ways away from London proper that it would have escaped the majority of the bombing. Anyway…

Hello, I’m new here, and would like to know if they will keep the Odeon name or will they call it “Reel Cineplex”, or something of that nature?

Thanks and congratulations. I love old buildings. I hope there’s not any asbestos mess to clean up in it.

Bombing was carried out over a wide range of English cities, usually those that had heavy industry or main rail links, which York has.
Its unlikely that the building will be called Odeon as that is the trademarked name of one of the UK’s cinema circuits. Reel cinemas properties are just know as Reel so it is expected that the building will be rebranded as this. The original sign is however included in the buildings protected status and will need permission if it is to be removed, though as its the last type of sign in existence it does warrant every effort to save it.

Can these people not help Bradford Odeon?
It has a lot of potential, and many of it’s original features still intact!

I started work as a trainee cinema manager at the Odeon York on 19th August 1969. And it only seems like yesterday. Manager was George Shepherd – a truely great man, a real gentleman. So many great memories. I even saw the forst moon landing, together with all of the staff. We were working and we watched the landing on a small portable B&W TV. Don’t know why that came to mind. I can picture the interior of the cinema as if it were yesterday. Anyone else out there who might remember those days?
Regards MikeChanning:talktalk.net

Thanks for all the tips mentioned in this article! it’s always good to read things you have heard before and are implementing, but from a different perspective, always pick up some extra bits of information. regards https://www.offiice-ssetup.com