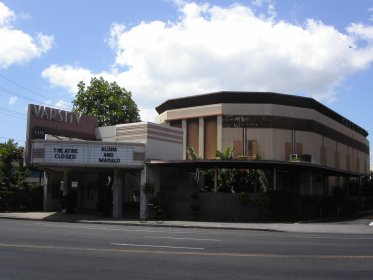 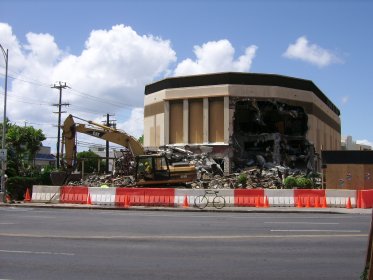 HONOLULU, HI — The historic Varsity Theatre was demolished today, nine months after closing as a movie house. Attempts to preserve the building failed because it apparently was structurally unsound. The Varsity opened in 1939.

I posted a photo of the demolition on my website.

Located a short distance from the University of Hawaii campus, it opened on September 8, 1939 with the film “Stagecoach,” with John Wayne and directed by John Ford. It was a second-run house throughout most of its life but in recent years was the local art house.

The theatre was designed by renowned local architect C.W. Dickey, in a spare Moderne style, with covered walkways and plantings on each side of the building leading to the main entrance and a high-ceilinged main lobby. Dickey was the architect of the beautiful 1936 Waikiki, torn down in 2006, the Asian-style 1938 Toyo, demolished in 1995, and two other unique island theatres.

While not as decorative or elegant as the others, the twinned Varsity had a loyal following and will be missed by many as the last operating historic neighborhood theatre in Honolulu.

Possibly its most outstanding feature was the large two-sided “wedge” marquee overhanging the sidewalk, lit by an abundance of green and blue neon. It was an eye-catching sight at night, especially for passing motorists, and a beacon for the neighborhood .

In the mid-1960s, the Varsity was leased by the nearby University for daytime use as a large lecture hall, accommodating around 850 students (including this author, who found it very hard to concentrate on the subject with the smell of fresh popcorn wafting through the auditorium!).

The property,which also includes a large parking lot and an adjacent round 5-story office building, was sold recently to Kamehameha Schools, a large landowner in the area. Interest had been shown in a short term lease of the theatre, but major structural prolems were discovered and the decision was made not to spend the $3 to 5 million estimated cost of repairs. The space occupied by the theatre will be used for more parking until overall redevelopment plans have been finalized.

(Thanks to Lowell for providing the photos.)

Funny, I’m near Chicago and eariler this morning I wrote a post about the Maunaloa Town Cinemas next door to you over on MOLOKA'I. Know anything about that?

Such a shame. It looks like it was a fine building.

Yeah, Bob. The Molokai Ranch is suspending all its operations on that island, including the Maunaloa movie house. As far as I know, it’s the only cinema on Molokai.

thanks for your (sad) article : I am currently hoping to have about 7 more classic pictures sent to me prior to scanning : (original photo’s from the 40’s and a hand tinted interior post card ) of the much missed Waikiki theatre added to my flickr site : I have some linked on Cinema Treasures already.

These are cool pictures, Kev. Did you mean to post them here, though? This is about the Varsity Theater, not the Waikiki. If you were just talking about lost Hawaii cinemas, never mind.

I swung by the Varsity Theater demolition site today and made this video:

Thanks for your youtube, as I watched it, a lot of it looked like a lot of sorting was going on for recycling, which was good. Near the end as s/he started to pull those beams out of the walls and I didn’t even see the walls shake even a little, I started to get mad. I think plenty of life was still left in the old girl! I think it was just another case like the Indian Hills Theater! If you don’t know that story, read that whole saga, that ended up, guess what, being a parking lot! “Make your blood boil, well I should say!”

“They showed the old movie theater, and half of it was gone.” Scott Ward

Thanks for your post, Bob. I almost imagined some ghost would be standing amid the Varsity’s rubble, like Gloria Swanson in the rubble of the Roxy:

Great job on the video bobosan. I’m no building expert, but I have to agree with Bob Jensen. I did not see any sort of weaknesses in those remaining walls. It looks like yet another case of would’ve, could’ve, should’ve. Too late now. By the way, is this area of theatre where the screen would have been?

I can conceive of how parts of the building might have needed big repairs. On the other hand, there might very well have been an effort to sell demolition to the public. Only those on the inside of the deal know the truth.

I really like this design. It is a shame they couldn’t have done better on this one.

Actually, movie534, the area I videotaped them demolishing was the front of the auditorium, behind the projectionists. By the time you read this, those wall will be rubble as well. Sad.

Too sad, in fact sickening bobosan

Had the earthquake(s) weakened the building?
.

Good question. I haven’t heard any suggestion that it had, but it’s not impossible. More likely though, it was just age. The theater was located very close to the H-1 Freeway, and half a century of vibrations from the traffic could have had a weakening affect. It lasted almost 70 years, which isn’t too shabby.

I went back today and shot a new video showing the Varsity, or rather what’s still there:

What’s that round building? Love your videos, just don’t like them tearing down a theater. I think that’s the closest I’ll ever get to getting back there. I used to fly in and out of the U.S. Naval Air Station, Barbers Point, all the time, now that’s closed. I think the last time I was there was in 1980 on my way back from U.S. Naval Air Facility, Midway Island, that’s closed too, and it had a movie theater I should add to CT. Course I could fly over, but my wife won’t fly since 9/11. I’ve got a good quote for that, hope my wife, daughter and grandkids don’t read it, I love them all dearly, but I sure miss O'AHU!

“Zorba the Greek” 1964
Alan Bates/Basil: “Are you married?"
Anthony Quinn/Alexis Zorba: "Am I not a man? And is a man not stupid? I’m a man, so I married, wife, children, house, everything. The full catastrophe.”

The round building is an office tower. Midway Island has been conquered by the albatrosses and numerous other birds, it’s a real nature preserve these days.

Ah yes, break my heart, the albatrosses (Gooney Birds, not the Douglas DC-3/C-47 Skytrain or LSD) had conquered the island even when the Navy was there. They had a terrible time keeping them out of the way. Join the Navy and see the world. In all of my travels that was the most interesting place I’ve ever been! After the Navy left Midway they had Eco-Tours from about 1996-2002 and I hear they are to start up again this year. If I can’t get to your island what’s my chances of getting to Midway? I understand they show DVDs in the old Midway Theater you ought to go over there and you’ll get to see the theater and the Gooney Birds, I think it’s only about a 1,000 mile swim from your place.

What is the correct spelling of this theater: