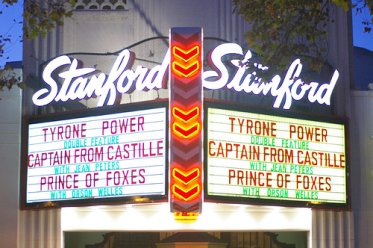 PALO ALTO, CA — The Stanford Theater and their classic film programs are featured in The Stanford Daily newspaper on August 7th. The article has a history of the theater and the reason that David Packard decided to buy it for his non-profit foundation.

Besides hoping to expose people to the Golden Age of movies, the Stanford Theater Foundation hopes to educate its guests about the art of early films.

“We want to make people aware of the need to preserve the old films,” explained Mortensen. “It’s not a permanent art form.”

The founder of the Stanford Theatre Foundation, Packard, agrees. In 1988, he told The New York Times, “Gradually, people are going to realize that these films are that important. When the classical scholars look back on the 20th century 1,000 years from now, what are they going to find valuable?” The movies of the Golden Age.

Read the story at the Stanford Daily .

(Thanks to catbagan for providing the photo.)

What a cool-looking theatre!! Thanks for sharing it. These old movie palaces of theatres are really what great movie theatres look like!

If you ever go to the Stanford Theatre get in the doors early for the organ pre show and two sets of curtains opening. Very few movie theatres today have curtains and the Stanford has two different types. One goes up the other parts. Check out the blue/purple lights up in the ceiling. This is a classic place to go if your in the Palo Alto area near San Francisco CA.

The Stanford is indeed a Bay Area if not a national treasure! No way it could survive in today’s commercial market without the deep pockets of the Stanford Foundation and the movie loving passion of David Packard though. It’s a beautiful theater with superb presentation and projection (35mm dual projector changeover of course since play play archive prints including nitrates). There’s also a Wurlitzer pipe organ for the silents. If that’s not enough popcorn and soft drink prices are unbelievably reasonable (cheap!), starting at $1.00 I believe! As far as I know there is not another theater like it in the whole country. I love the Stanford and hope it and it’s policy of showing only films from the Golden Age of Hollywood (roughly 1920 to 1960) will be around long after I’ve gone.

Agreed! I stumbled upon the Stanford Theater (probably through this site!) and I’ve been hooked ever since. With $7 ticket prices for a double feature and $3.50 for a medium popcorn and a large Coke (uniquely delicious there), it’s a great deal for anyone even remotely interested in classic movies. It’s gotten so that I’ll avoid seeing a classic on tcm or dvd the first time on the chance that it’ll play the Stanford. Nothing compares to seeing a classic for the first time in this beautiful theater.

Hey….I live on the opposite side of the United States (the East Coast), but if I lived near the Stanford Theatre, I’d make a point of going there, not to mention requestion/suggesting some of my favorite classic films.

Check out the Stanford’s website to see the current program which is the annual summer film festival, usually a mixed bag but with lots of James Stewart and Bette Davis this year. You can also browse the programs of past festivals which are normally dedicated to a specific star or director. They even had a dual projector 3-D Festival at one time (wish they would do a repeat of that one!). You can even check out a list of every program that played the Stanford since it opened back in the 1920’s.

I checked out the link—sounds like there are some cool films in the offing.