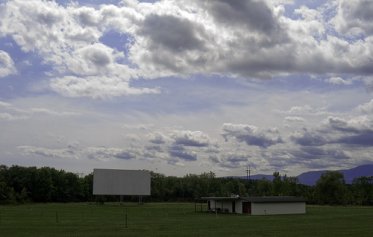 DAVENPORT, IA — Although not quite as early as initially reported, the Reel to Reel drive-in is still in the works.

Located off West Locust Street and north of West Lake Park in Davenport, the family’s Reel to Reel Drive-in – co-owned by Aaron, Randy, and Terri – is scheduled to open in the spring of 2009, and will stand as the first operational outdoor theatre the Quad Cities area has seen since the closing of Davenport’s Oasis drive-in in 1987.

The two-screen Reel to Reel was originally slated to open this past April, but Mother Nature nixed that plan. “The rain was the big delay for us,” says Arron. “We basically have to move every square inch of dirt on our entire eight acres, and we were told [by contractors] that unless the ground’s solid six inches through, it’s not even worth coming out.

Get the full story in the River Cities' Reader.

(Thanks to mjcarrasquillo for providing the photo.)

Sounds cool! Sorry to hear that it got delayed by April’s excessive heavy rains, but I guess that’s how Mother Nature works sometimes—doing this from time to time just to show who really and truly runs the Universe. Drive-In movie theatres do have an advantage over indoor theatres, in that, yes, people can talk, laugh, poke fun, and jab, because they’re in the confines of their own car(s), and therefore don’t have to worry about disturbing other moviegoers. Also, there’s something inherently special about seeing a movie outdoors, under the stars, especially in an urban area, where the sounds of the city can and sometimes do add a whole other dimension to the movie.

The disadvantage to Drive-In movies is if it rains, it’s more difficult to see a movie, no? What about in the winter? Do drive-ins generally close down for the season in winter? Just curious.

In Minnesota, the drive-ins generally open for weekends in May, are open most nights between Memorial Day and Labor Day, then taper off to weekends only in September. Some drive-ins may be open only on weekends even in the summer. The DI’s in the Twin Cities are usually very busy in the summer. The Cottage View runs two films, and the Vali-Hi runs three. Very reasonable entertainment and an entirely different experience than an indoor venue.

Oh, absolutely, J. D. Paska! I still remember the times back in the late 1950’s, when my sister and I were preteens (my brother hadn’t come along yet), our parents would pile everybody in the family lime-green Rambler station wagon, take us out to dinner, and then, since we had to take blankets and pillows, to a drive-in movie, where we could either watch the movie or fall asleep in the (flattened) backseats of the station wagon. The Fresh Pond Drive-In, in Cambridge, MA was where we’d go, and there’d be a small speaker for each car, and hamburgers and french fries were had, if we went early enough. However, the Fresh Pond Drive-In hasn’t existed since the early to mid 1960’s, and it’s highly doubtful that it’s ever coming back. I don’t remember whether it was just seasonally open, but I do remember the Natick Drive-In being open even in the wintertime.

Off the record, I wonder what a film such as West Side Story would be like on a huge 100-foot wide drive-in movie theatre. I bet it would be pretty spectacular.

btw, Jay, thank for the info about seasonal openings and closures of the drive-ins that you mentioned.