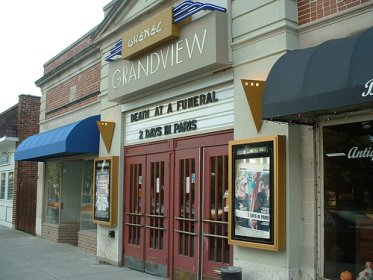 COLUMBUS, OH — After over 80 years in the business, the Drexel Grandview is closing its doors and leaving nothing but memories for its community. Current management head Jeff Frank states that offers to buy the theatre and add screens have been refused.

The Drexel Grandview, the oldest movie theater in Franklin County and one of the region’s few venues for art films, will close Sept. 27.

Owner and manager Jeff Frank said today — the eve of the theater’s 82nd anniversary — that operating a single-screen cinema in a weak economy amid rising costs and a sea of multiplexes has become impossible.

“It’s a dinosaur, and I think we operated it way past what anybody in the industry says anybody could possibly do,” he said. “I don’t think it’s economically viable for it to ever be a movie theater again.”

Read more in the Columbus Dispatch.

(Thanks to monika for contributing to this story)

(And thanks to Betty B for providing the photo.)

Someone wanted to buy the theater and add screens? So these guys would rather close the place than sell it to someone who would expand it and add more movie screens?

I don’t live in the Columbus, Ohio area, but, imho, there are far, far too many multiplex theatres dotting the American landscape and making tons of money by charging exhorbitant admission and concession prices, in addition to playing the crummiest, schlockiest movies that’re overblown, overly graphic, and have too much exploding on the screen. Inotherwords, they’re long on style (if one can call it that) and woefully short on substance. While there’s an occasional good or OK film to be had at some of these multiplexes, mostly they’re not good. There are some rare movie theatres (i. e. the Coolidge Corner Theatre and the Somerville Theatre) that started off as single screens, added afew more movie screens and have survived as theatres that play good movies), not to mention the Brattle Theatre, which is still a single-screen movie theatre that plays retrospect films and has survived due to people’s goodwilld, etc., but theatres like that are few and far between.

Would it be possible to add afew more screens (not a whole lot) to the Grandview Theatre and still preserve it as a movie that plays independent films, classic films., etc? Just curious.

The owner may have another plan for it. I know that local live performance groups have shown interest in the theatre in the past. Just an idea.