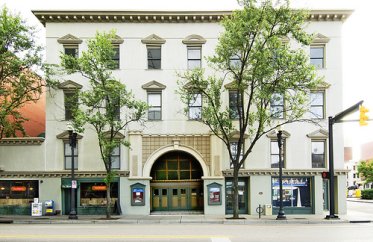 KNOXVILLE, TN — A new marquee is up to celebrate the Bijou’s Centennial.

A blue vertical sign with 448 LED bulbs and sidewalk marquee was turned on just before 6 p.m. at the 803 S. Gay St. theater to celebrate the building’s first century.

The ceremony began four days of Bijou 100 Year Jubilee events and the culmination of the “Light Up the Bijou” campaign that raised money for the marquee and sign that gave the Bijou a look similar to one of its past. The Bijou for decades had a sign and marquee. The last marquee apparently was removed when the theater was saved from demolition in the 1970s.

Read more at the Knoxville News.

(Thanks to lumierefl for providing the photo.)

That is a very nice photo posted. Pretty theater.

Unfortunately, this is how the theater looked BEFORE the addition of the marquee. It’s a beautiful building and the entry was quite elegant. That’s now gone.