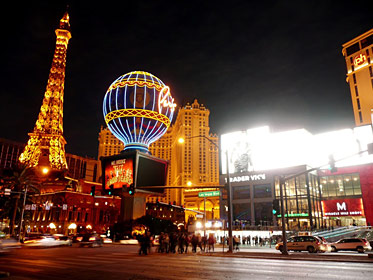 Patrick Crowley and Ross Melnick will be at ShoWest next week talking to exhibitors, technology companies, and journalists about the future of theatrical exhibition.

If you are an exhibitor, technology/equipment provider, publicist, or journalist, and would like to schedule a meeting in Las Vegas, please email Ross Melnick at .

Look for our post-ShoWest coverage upon our return!

(Thanks to Flickr user http2007 for the shot of Vegas.)

You should suggest that they find a way to keep old movies on film by striking new prints, instead of everything going to digital, which most rep houses are never going to install.

It would have a first-hand report, perhaps someone to post pictures, maybe some video of your activities there? :)

Given Show West is a Hollywood trade show event, I imagine everything will be digital this and digital that. Future digital exhibition technologies maybe?

“ You should suggest that they find a way to keep old movies on film by striking new prints, instead of everything going to digital, which most rep houses are never going to install.”

is something that I totally agree with, and I’m sure tons of other people would too. Bravo!!

Hit the tables Ross! After you double up you can use your winnings to reactivate the add photo feature.

ShoWest is fun, and it is a great way to talk to other exhibitors and see how thing are going, see new products, and so forth. They have been pushing digital on us year after year after year…. each year saying things like “within the next couple of years we expect more and more theaters to convert to digital” all the while most of the exhibitors I talk to personally are pretty much happy with 35mm film. It is the studios who are pushing this agenda since it is their party and their rules. I can’t tell you how many conversations I’ve had with total strangers in elevators, etc. during ShoWest where we end up remarking how much we all want to keep 35mm film.

My biggest problem with all the speeches and banquets and awards and all that at ShoWest is that nobody stands up there and puts the truth out there: if AMC and Regal and National and Cinemark and all the rest of the big boys actually gave a crap about the status of moviegoing in America as they claim they do, they, these handful of people, have the power to change it for the better. They have the power to pay their staff a better wage and demand better results from such a policy, they have the power to concentrate on presentation and cleanliness instead of advertising and gimmicks like 3-D, the latest nacho cheese, or digital. These handful of theater chain executives have instead cannibalized and diminished a very special cultural thing – going to the movies – and made it mediocre and generic and taken almost all of the magic out of it.

I like ShoWest, and I like many things about the industry, but once I just wish someone would give a speech and let them have it.

Well said Ian. And I’m not trying to hop on the anti-chain bandwagon either. The chains simply took most the fun out of operating a theater for the staff thats involved. I’m good at running films, love the craft and providing the presentation essentials but there just isn’t work like that anymore at most theaters.

Lets take all the staff and have them work in varying areas of the theater at a time so instead of one being able to focus on specific tasks well executed you end up with a mediocre result across the board. Genius!

I am very, very proud that this website is represented at this event and hopefully the industry will visit Cinema Treasures for the best patron insight available. And thank you to both my buddy movie534 and Ian’s great postings above.

Have yourselves a great time, and remember,“What Happens in Vegas, Stays in Vegas.”

Bravo to a_projectionist!!! He hit the nail sqaurely on the head. This has been my gripe for years. Before you were a showman, now we are just button pushers. All the joy is gone. And this past weekend, I ran my very first digital projector. Now I dont want to sound anti-digital, but its too bright, too antiseptic for me. And its so easy, that once the conversions are done, what few projectionists are left will be gone for good. I’m sure many of the folks on this site will agree with me. 2 projectors and changeovers. The way FILMS were meant to be shown, by true movie professionals.

Too bad ShoWest is not allowed for the public to attend, although internet junkies like me can follow the developments online and also on the business channel CNBC, which has allowed one reporter to cover the economics of the industry, which is experiencing its best year to date performance ever.