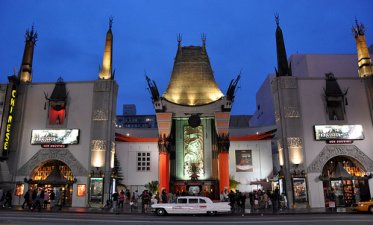 HOLLYWOOD, CA — Citing difficulties making a profit on their single screen theaters, Mann Theatres is attempting to unload the famous Grauman’s Chinese as well as the Criterion in Santa Monica. This comes after they recently closed the Mann Festival and announced they would not be extending the leases on their other Westwood locations.

Amid seismic shifts in local exhibition, Warner Bros. and Viacom are stepping up efforts to unload L.A.-area movie theaters piecemeal, including the iconic Grauman’s Chinese in Hollywood. Such an exit would conclude an initially profitable but more recently tedious tenure of ownership for the studio companies.

Execs at Cinemerica — the co-venture of Warners and Paramount-parent Viacom that operates Mann Theatres — believe the timing is right to make a concerted run at selling one or more of its Mann venues. Two are considered especially attractive: the fabled Grauman’s on Hollywood Boulevard and the Criterion Theatre on Santa Monica’s Third Street Promenade.

Read the full story at the Hollywood Reporter.

(Thanks to Nico for providing the photo.)

Mann Theatres is just selling what left on their lease, which is 14 more years. The ground lease was taken out in 1924 for 99 years which will expire in 2023. At that time the building will belong to the land owner which Mann has been paying rent to. The CIM Group owns the land which the theatre sits on. They also own the Highland Complex next door plus alot of other properties. The Chinese Theatre property does not show up in their site because it becomes their property till 2023.

The Chinese is the theatre in whats left of the Mann Circuit that is desirable. Warner Bros and Paramount have been lazy landlords in regard to the Mann Theatre Circuit. The Chinese has been booked so poorly that a sale to someone like Pacific would be an improvement. I can’t understand why Warner Bros and Paramount just don’t retain the Chinese and Village as flagship venues and get rid of the rest of the theatres.They could position both theatres as special deluxe theatres as Disney has done with the El Capitan and Pacific’s Cinerama Dome. The Distribution Arm of both companies could take a lesson from Disney.brucec

I think Pacific is content with what they have in Hollywood. The Chinese is desirable for its historic value, but beyond that it is not a top venue any longer. I live in West Hollywood and still choose it over the Grove, but I know many in my neighborhood who do not patronize the Chinese because they hate the touristy crowds. Like the Village and Bruin, the Chinese does not attract the current movie goer. They do not understand the significance of these theatres, and do not appreciate the beauty of them. Most people are lazy and rather just be hearded into a multiplex. It is sad.

The El Capitan has thrived because of Disney’s input. They took a large theatre and turned into a Grand Palace again. The bookings are like a Roadshow Special Engagement that used to be the norm for theatres like the Chinese. It gives the theatre an edge and makes it a special experience again. Perhaps that is what the Chinese will need, a studio to take over and use it as a showcase for their big films. But in today’s market it is all about just getting as many screens as possible and the big opening weekend payoff. It is going to be interesting to see what happens.

I’ll go back to seeing films at the Chinese when they restore the original box office and get rid of the impersonators. Also, Mann did a terriable job in the last few years in booking the theater and really did a lot to reduce the class this place once had. When I was last there in 2006 to see “Superman” I swore it would be my last until things changed. Let’s hope that whichever chain picks up the lease improves the situation. Hell, at this point I’d even welcome Disney!

Dublinboyo, what do you mean by impersonator?

They are those people that dress like movie stars of the past, movie icons, lame super heroes, cartoon characters etc.. They roam around that block around the Chinese. Times Square has funky cartoon characters roaming around the area trying to get you to have your picture taken with them for a tip.

The CIM Group is already the landlord of the Chinese 6. And they own the former Holiday Inn which now known as the Hollywood Renaissance Hotel behind the Hollywood/Highland complex.

The Chinese should remain for daily movies! they should advise ticket buyers they will toss out those who loudly talk or use their cell phones.

I actually think the Chinese looks better now than it did before the remodel when they added the box office to the forecourt. There is nothing wrong with the theatre as it is. Heck, I do not even mind the out of shape Superheroes and the drunk Shrek. I’d just like to see it get its fair share of films. Over the past couple of years Arclight seems to be out bidding Mann for films the would have not so long ago played at the Chinese. Back in 2005 Mann had Batman Begins, War of the Worlds and Charlie & the Chocolate Factory during that Summer. This year they all would have been probably at the Arclight.

The Chinese will always play films in one capacity or another. It’s significance is still vital.

“I’ll go back to seeing films at the Chinese when they restore the original box office and get rid of the impersonators.”

Well, there’s nothing the Chinese people can do about the impersonators, as long as they are not on the property itself. They usually stick to the public sidewalk, making it impossible for the Chinese to do anything about it.

As for the original box office… I would suggest Dublinboyo take a look at this (http://thegreatgeekmanual.com/images/geekhistory/may/sid-graumans-chinese-theatre.jpg) and this (http://helios.library.ca.gov/soca/mott-merge/1992-1947.jpg), two pictures of the Chinese forecourt from the late 1920s. Hopefully, Dublinboyo will notice there is no box office in the forecourt. That’s because the forecourt box office was added sometime in the 1940s, nearly 20 years after the theatre opened. The forecourt today is as close to the original forecourt setup as possible.

I would not be suprised that Kerasotes, AMC or Landmark gets their hands on it. It would make a great addition to the chain that buys even it is an loss leader.

Landmark would be great for the theatre. Maybe they would consider in order to get a foot in the Hollywood area.

Landmark is an arthouse chain and they have their flagship multiplex so I wouldn’t expect it.

A chance to own the Chinese Theatre doe not come around that often.

However said, the name MANN has been the largest moving force of closing/selling theatres since 1971, and I mean 100’s of them nationwide. Must have been evil forces involved when he removed the name GRAUMAN from the CHINESE and added his name. Poor choice for trying to power out fame from a name. Not only is Mann himself gone, so is his “what’s left” legacy of theatres.

Mann theatres has been closing down shop for quite a while now. They used to have a strong presence in San Diego and are completely gone from there all together. It has been evident in SoCal for a few years now.

At least the wax figure of Rhonda Flemming is gone from the lobby of the Chinese theatre.

I’m pretty sure the Chinese and Criterion 6 will be snapped up from this going out of business sale without a problem. The other outlying screens will probably be picked up by one of the chains. My guess is there will be no takers for Westwood when all is said and done.

“Broadcasting from the world famous Grauman’s Chinese, located in the heart of Hollywood, it’s… Wheel…of…Fortune!!”

Yup. Another one bites the dust.

Well goddbye ole friend, The end is inevetable.
Folks just don’t care about preserving treasures like this one anymore. I suppose California folks can feel lucky the theatre lasted this long. If it had been in NY it wold hawve been torn down years ago. We have lost almost all of great theatres here.

I still recall the day when Fred Astare came in and sat two rows in front of me. :)

If I had some $$, that theatre would be mine.

Move me out there, put me up and I’ll run it.!!
I hope this treasure will be forever, I get a sick feeling everytime I read about ,yet, another theatre closing, or going on the auction block, or just losing its life and being turned into a pile of rubble. So much history, so much love, I can not think of a world with out “the Chinese Theatre”, The episode of I Love Lucy will not make any since if its gone,(Where Ethel and Lucy steal John Waynes(Waine, as Fred spells it,) block)

Wouldn’t it be luverly if we could only wind the clock back several decades as to when the studios controlled all of their own cinemas!

But, no. Some clown had to poke his bloody nose into a perfectly well run system.

What about Krikorian Theaters (L.A. based?) adding Grauman’s to their small chain of classy theaters?

If Landmark somehow ends up with this theatre, I will never attend it again. Period. Mark Cuban will run it like he runs his sorry @$$ed baskeball team.

Goodbye old friend? The end is inevitable? The theater is not going anywhere.

if anyone but arclight buys the chinese, they will have the same problem mann has had – trying to compete against the 15 screen arclight with only half as many screens at hollywood and highland. For that reason I hope arclight gets it. That way everything except disney/touchstone (which always plays at the el capitan across the street) will be able to play at Graumans.

is it abc that owns disney, or disney that owns abc? I forget. Maybe abc could buy graumans, then disney leases it from them just like they are leasing the el capitan right across the street. Probably only disney/touchstone movies would play there, but at least Graumans would still be a first run movie palace.

To clarify in my previous post, when they opened the Hollywood and Highland complex in 2001, the Chinese became part of an even larger tourist attraction and the forecourt became home to a thriving buisness of Comicbook Superhero impersonators. On any given weekend you’d see, Superman, Batman, Spiderman (3 of them!), The Hulk, Wonderwoman and pretty much you name it. They even made a film of them called “Confessions of a Superhero” which follows 4 of them – including one Superman who claims to be the son of the late actress Sandy Dennis. The impersonators make their money off tips and some even have anger issues and have been arrested from time to time, but my main objection is how kitchy the Chinese Theater has become because of them.

I still think Pacific should acquire the Chinese (and the rest of Mann’s properties. Then they could book films at the Arclight and Chinese (perhaps even the same film if demand calls for it).