3 Strip Cinerama and more at the Cinerama Dome 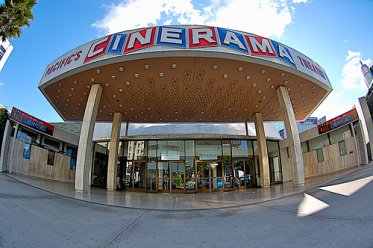 Then, Tuesday, Wednesday, and Thursday, “This is Cinerama” and “How the West Was Won”, presented in the original 3 strip Cinerama projection process with 7 channel magnetic sound.
Plus, on Tuesday only, a unique single lens Cinerama 70mm double feature, “The Golden Head”,1965, starring George Sanders and Buddy Hackett, and “Holiday in Spain” with Peter Lorre. “Golden Head” is known as the “lost” Cinerama film, as it was never released in the United States, and “Holiday in Spain”, 1961, was originally released as “Scent of Mysetry” in smell-o-vision.
All films are showing in The Cinerama Dome at ArcLight Hollywood.

Tickets go on sale this Friday, August 14 on line at the ArcLight Website.

(Thanks to Lu5h.bunny for providing the photo.)

If you’re in and around the Los Angeles area, by all means go and support these screenings.

Note that only “This is Cinerama” and “How the West Was Won” are 3 strip Cinerama. These are the restored prints that have played the Dome several times before and they are excellent. “The Golden Head” and “Holiday in Spain” are 70mm with severe color fading and frankly not very good films. It indeed is a rare chance to see them though. The two three strip Cinerama films are definitely worth the trip to Hollywood, wish I could be there myself! Here’s a little more info since the Arclight website has yet to be updated:

Tickets are avialable on the website, arclightcinemas.com.
Its a little difficult to find at this time. Once you’re on the site,
click on ARCLIGHT PRESENTS and that will get you to the Cinerama tickets sales.

Many are coming in from all over the world for this rare opportunity to see these vintage films in thier original format. This is the link to order tickets: View link

CINERAMA 70MM MEGENTA-SCOPE DOUBLE FEATURE
THE GOLDEN HEAD 8:00 PM
HOLIDAY IN SPAIN 10:00 PM
(These are the only known prints of these two 70mm Cinerama productions. Both films are faded with, magenta being the primary remaining color. “The Golden Head” was never released in the United States.)

The post above Manwithnoname does mention that its a 70mm MAGENTA-SCOPE DOUBLE FEATURE. We have screened both prints and they are physically in good shape but are badly faded. They are certainly not up to ArcLights high standards, but I thought that GOLDEN HEAD, never released in the United States, and HOLIDAY IN SPAIN, largely forgotten would make a unusual double bill for curious movie-goers.

I really want to see the credits for “the Golden Head” but can’t get out to LA. Will anyone be there who could take video (or stills)?

I would certainly cover expenses to video/photos. I would even pay for your tickets.

Heaps of valuable data and motivation, both of which we all need!Relay value your work. Totally incredible posting! Personal Loan