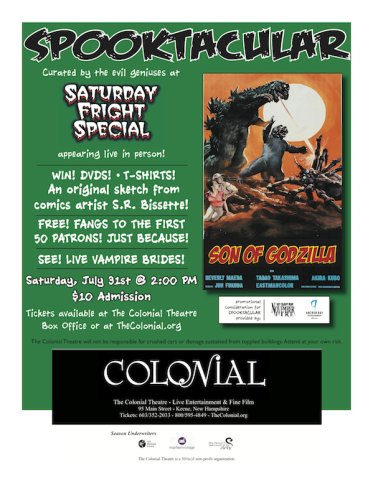 In addition to the main feature, cast members of the NH-based horror host TV show SATURDAY FRIGHT SPECIAL will appear on stage to introduce the film and conduct prize giveaways, featuring signed comics and original sketches by horror comics icon S.R. Bissette (who’ll be debuting a new comic at the event), as well as additional original sketches from students and alumni from the Center for Cartoon Studies in VT. Preceding the feature will be vintage monster movie previews, snack bar ads, and a cartoon.

This screening will be the finale to the Colonial Theatre’s annual summer Family Film Series. “We’re thrilled to be able to present an old-fashioned kiddie matinee with all the trimmings,” said SATURDAY FRIGHT SPECIAL’s Mark Nelson, “What’s doubly cool about this is we’re not only presenting a Godzilla film on the approximate day and time that most 70s monster fans first saw these films (both in theaters and on TV), but also that "Son of Godzilla” was never released theatrically in the US, so we’re actually giving fans something they were never able to get on the big screen way back when."

Tickets for the event are $10, available at the Colonial Theatre Box Office.