The Lebowsky Center has a roof again 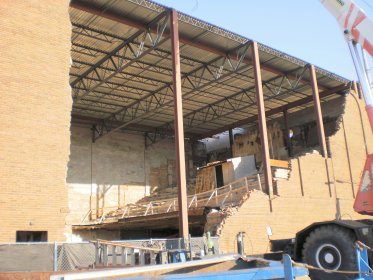 OWOSSO, MI — The rebuilding of the fire-gutted Lebowsky Center is on schedule with the planned completion of Phase I, the exterior rebuilding, set for the state-mandated date of September 1. An event is tentatively planned for October 22 to unveil “the interior of the exterior.” Details can be found in the Argus-Press.

Looking at the rebuilding process, the new bones use modern construction techniques with a flat roof instead of the original pitched roof, but the front facade of the theater wall will still have the gable end look. While the west wall is up, most of the face brick on that wall has yet to be laid as well as the face brick on the front facade. There is no roof on the stage house yet. The prominent east wall along Park Street will go up after work is completed on the roof. As the Argus-Press article states, the face brick is expected to arrive the first week of August. I wonder if the original brick saved from the demolition will be reused on the east wall.