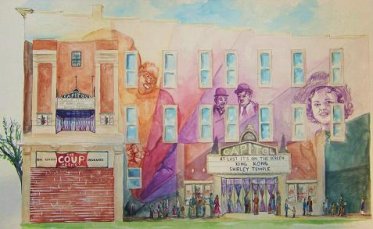 The first completed mural honors the restoration and re-opening of the Capitol Theatre, 55 Broadway, Milton, PA, on August 6th 1972. The massive restoration project was by The Cinesathe Group (Jack Oberleitner, Thomas Poling and others). The colorful mural depicts the front of the theatre and renderings of Shirley Temple, W.C. Fields, Laurel and Hardy and King Kong, all of which were represented on the opening night extravaganza which included gifts for all “first nighters” including orchids for the ladies.

A town celebration is planned to honor the Theatre, The Cinestage Group, and the artist is planned for the Summer of 2011.

Oberleitner and The Cinestage Group now work exclusively with small companies and specialize in working with non-profit organizations and may be contacted at 937.751-7669.

Read the entire story in the following three links:

Excellent articles Jack. Tell me do you have any interior shots of the Capitol?

You will have to tell it to me sometime..