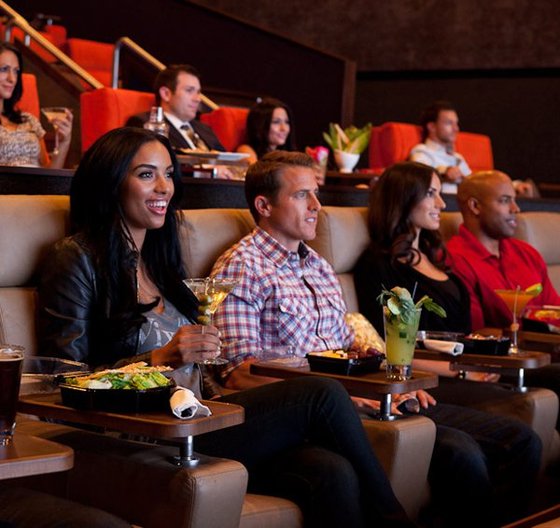 DOWNTOWN CROSSING, MA — A vacant Borders Bookstore is being considered as the next location for the luxury chain, iPic Theaters. It could revitalize the neighborhood but whether such a high-priced ticket will be marketable is still up in the air.

Having a movie theatre in Downtown Crossing would be wonderful, but the idea of having another luxury chain (such as iPic) theatre is questionable for at least a couple of reasons:

B) There are enough of these multiplex movie theater chains that dot our highways and byways, and play the worst schlock regarding movies as it is? Why do we need any more of those? Why not have a movie theatre that not only plays older classics, foreign films, independent films, but also provides options for people becoming members, and therefore being able to get into the movie theater(s) at discount prices?

Do people need to eat their lavish meal while at a movie theater?

What are those people in the photo watching? It isn’t a dark theater…..

Those folks are likely models, hired for the photo. I can’t relate to the idea of eating a full meal while watching a movie. If I’m going to the movies, I want to lose myself in the film—not be distracted. I don’t often buy food at the movies (except at the Stanford in Palo Alto, where concessions are cheap!), but when I do, I typically finish my small popcorn by the time the previews are over and opening credits are underway, and then nurse my soda dissociatively throughout the picture.

If you’ve ever been to the Alamo Drafthouse before, then you know this concept is viable.

While you may not wish to have a drink or eat a meal for EVERY movie, it can definitely be a fun treat once in a while.

The Alamo has the best take on this concept, IMHO. But I look forward to trying an iPic theater soon.

Sometimes, the idea of having at least a small meal and/or a drink at a movie theatre is a good one. The Strand Theatre, out in Clinton, MA, has that policy, and it seems to work quite well.

It will be great experience for all the 3D movie lovers who are die hard fans of movies.

Chapel Hill is also about to take in that concept as well. Carmike Cinemas is in talks of putting a ten-plex on the site of the former Border’s Bookstore at the Intersection of Page Road and Fordham Boulevard(U.S. 15-501)next door to Lowe’s Home Improvement and across from Performance Chevrolet. I think either Regal Theatres or Galaxy Cinemas Group is also interested in the project as well,since it will be the first on that side of Chapel Hill since the Village Plaza closed in 2003 and was demolished in 2007.

A movie theater on the site of where Border’s used to be. Interesting. Near 15-501. The nearest multiplexes in all of Chapel Hill are either South of 15-501 in Southern Village(The Lumina),OR on the Northern end of the city off MLK Blvd.(Airport Road)at the Timberlyne Cinemas 6 or The Chelsea 3(which shows independent and foreign films) But another multiplex? The last theatre that was on that side of Chapel Hill closed in 2003 which was The Village Plaza Cinemas. But we’ll see. Chapel Hill,North Carolina

This might not happen at all, as Borders has at least temporarily cancelled plans to close this store.

Ron Newman: That maybe the Borders where you are at,but here in Chapel Hill,North Carolina,the Borders Bookstore is permanently closed….Borders also had a Borders Express in Chapel Hill’s University Mall,has closed too. There is talks of putting a multiplex there or eother also pr

In the event that a movie does open at Border’s at downtown crossing, let’s hope it plays better quality films than the multiplexes that dot the highways and byways of the United States.