Crest Theatre likely to lose two of its three screens 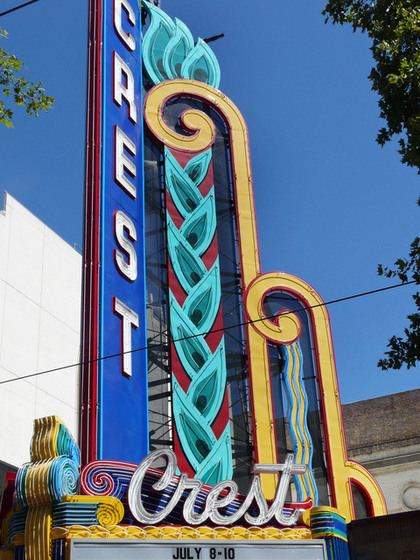 SACRAMENTO, CA — The independent Crest is losing its two downstairs screens to a potential business like a restaurant or jazz club. The 975 seat upstairs theater will remain intact.

Read more in the Sacramento Bee.

(Thanks to John Rice for providing the photo.)

To clarify, it seems as if those additional screens are in the basement, that the main auditorium is intact.

What a shame. It was an absolutely beautiful theatre when I worked there as a projectionist in the late 60s. It has two Century and one Simplex E-7 projectors. It probable could have been saved if the owners knew how to program the place.

As HBH noted, the original theater will remain intact; the additional screens that will probably close were created out of basement space.

True the original auditorium of the Crest will remain intact and regularly showing films (and that’s a good thing!) but it’s a blow to the already underserved independent/foreign movie scene in the Sacramento area. Besides the Crest all we have left in the now rather shabby Tower which was pretty much ruined by the ugly but probably necessary sub-division. Presentation there leaves a lot to be desired!

Too bad the planned downtown K Street Century Cinearts multiplex never got built, mainly due to understandable opposition from the Crest and the Tower as I recall. It’s also too bad Landmark, the former more capable operators of the Tower abandoned the Sacramento market.

umm Nobody is saying it but the two reasons the possible closing of these theaters (btw there very nice little theaters perfect for the Indie movies, Presentations or Meetings) is simply I am sure management does not have the money to adapt to digital and Downtown Sacramento sucks when it comes to parking, its expensive, predatory practices with the Parking Nazi’s and not safe to travel other than drive times on transit, If it wasn’t the size of the screen of the I-MAX and the subsidies it gets from the city it would be a failure too – Example to park in the Garage near the I-MAX theater and to see Cloud Atlas on a Saturday afternoon 20 dollars for the ticket and drink and 20 dollars for parking. You can get it cheaper but its over 5 blocks away