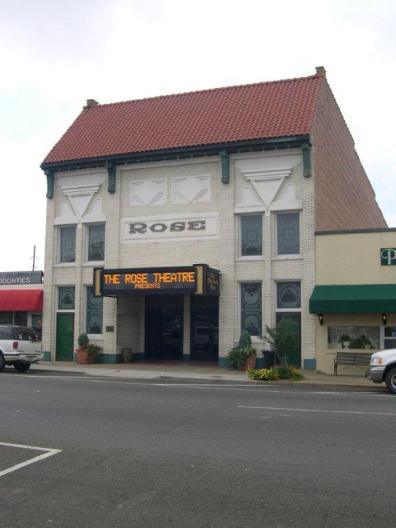 BASTROP, LA — The smell of hot popcorn cooked in coconut oil and the light bouncing off the silver screen, nothing is more American than the grand tradition of seeing a movie in a true single-screen movie palace, well except for baseball and apple pie of course. That tradition is set to return this spring to the city of Bastrop, La. as the Rose Theatre is set to become the second single-screen theater in Northeast Louisiana to return to her roots in motion picture exhibition.

“The Rose Theatre is thrilled to offer this new entertainment option as we strive to fulfill our mission in the community,” Sara Holley, Vice President of the Cotton Country Players, said. “We are thankful for the support of devoted actors and volunteers, generous patrons, and cooperative business and civic partners—all of whom play a crucial role in keeping this treasure alive in Morehouse Parish. Now, we are looking forward to complementing our current line-up of live entertainment with some of the best pictures ever to hit the silver screen.”

If the Fiske in Oak Grove is the “Grand Dame of Northeast Louisiana Movie Theaters,” the Rose has to be the “Great Grand.” Built in 1927 by the Goodwin family of Bastrop, in her prime the Rose was the premier place to catch the latest flick in the region.

Beginning in March, the Cotton Country Players, who now own and operate the Rose as a Non-Profit 501-C3 organization, look to recapture that magic by becoming the only theatre in the region to offer classics, retro and arts flare films.

This charge is not something they are taking lightly either. The Cotton Country Players have pulled no punches in their return to motion picture exhibition, bringing in one of the industry’s most respected showmen in the region Adam Holland, President of Holland Entertainment LLC of Oak Grove which operates the Fiske for the West Carroll Chamber, to help guide them in this new venture.

“What a tremendous opportunity,” Holland said. “Just as the Fiske strikes a chord with the people of East and West Carroll Parishes, the Rose has a special place in the memories of the people of Morehouse. We are excited about bringing the magic of movies back to them in their movie-house and look forward to working hand-in-hand with Artistic Director Hal Robinson and all the fine folks of the Rose to provide first-class affordable family entertainment to the movie going public of the area.”

Holland has been a part of motion picture exhibition since 2007, first as the volunteer chairman of the W.C. Chamber’s Fiske Theatre Committee, then the Director of the Fiske and in 2011 his family began operating the theatre as Holland Entertainment as studios forced exhibitors across the nation transition to digital projection. Over the past six-years he has been instrumental in bringing Fiske back to her prime as Northeast Louisiana’s most modern and well equipped movie theatre. Holland will serve as the lead consultant for the Cotton Country Players in the initial phases of this venture, as well as serving as their booking agent with the studios.

The No.1 musical of all time “Grease” starring John Travolta and Olivia Newton John is slated to be the first picture to light up the screen at the Rose since the mid1970’s the weekend of March 15-17.

“We plan to start slow and follow the pattern of the Fiske like they did in Oak Grove,” according to Rose Theatre Board President, Jason Bonner. “Playing a movie one weekend a month, but who knows where this may lead.” Executive Board Members Debbie Womack and Ron Carter include, “This is sure to entice everyone. The excitement of watching a great classic in a building where the movie was originally shown many years ago add to the uniqueness and vitality of our historical theatre.”

Tentative movie scheduling for the first period of the Rose Film Series include Gone With The Wind; Dirty Dancing; The Good, The Bad and The Ugly; and Top Gun. Movies are scheduled to play the third weekend of each month.

“We have heard what our citizens have said and that is they want movies,” said Bonner. “Now it is up to them the see that this program is a success by buying tickets each time a movie takes to the screen.”

Even with the transition of motion picture exhibition, The Rose Theatre will still continue with its traditional live productions, dinner theatre, YOUtheatre, and Summer Stars. Jason Bonner comments: “We are not taking away from the Rose; we are adding and expanding.” Sara Holley and Hal Robinson agree, “Some people prefer movies over live, artistic, productions; and some people prefer live productions over movies. The addition of showing movies will provide more entertainment opportunities for the residents of Morehouse Parish and allow the Rose to expand its audience.” Adam Holland comments, “It’s a win-win situation for Morehouse Parish – entertainment for Morehouse and a boost to the local economy.”

The Rose Theatre has many offerings on the horizon – Grease March 15-17; YOUtheatre performance March 8 – 10; Equinox Jazz at the Bastrop Historical Apartments April 6; and Dinner Theatre at the Visitor Center April 26-27. What better time to join the historically rich and increasing diverseness of the Rose as we continue to bloom for Morehouse Parish.