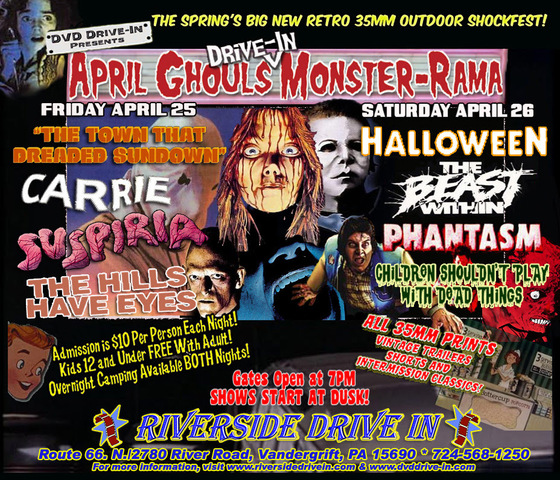 VANDERGRIFT, PA — For eight years in a row, we’ve brought back the fun in going to the drive-in, with our annual, award-winning September DRIVE-IN SUPER MONSTER-RAMA event. Now, for a second year in a row, the Riverside Drive-In Theatre is bringing the same retro thrills to their giant outdoor screen with the 2014 APRIL GHOULS DRIVE-IN MONSTER-RAMA! Like the September spectacular, this is two nights of classic horror and monster 35mm prints presented at an authentic drive-in movie theater. There will be two big shows on two consecutive nights which will start at dusk and go on until really late into the night! We have some very special treats in store, so we encourage all drive-in movie fanatics to travel from near and far, as you’re not going to find anything else like it, anywhere!

What could be better than a weekend getaway topped off with two nights of classic monster movies on the big outdoor screen? We realize that everything is so expensive these days, but admission is still only $10 a person each night! Plus, children 12 and under are free with parent or adult guardian. How can you beat that? The Riverside’s concession stand is loaded with reasonably priced goodies, including hot foods, hot and cold drinks, candy, popcorn and much more!

What is being shown and when?

On Friday, April 25, the features will be “The Town That Dreaded Sundown,” Brian DePalma’s “Carrie,” “Suspiria” and Wes Craven’s “The Hills Have Eyes.”

On Saturday, April 26, the features will be “Halloween” (original), “The Beast Within,” “Phantasm” and “Children Shouldn’t Play With Dead Things.”

Note: The 8th Annual DRIVE-IN SUPER MONSTER-RAMA will take place on September 12-13, 2014. Features to be announced this Spring.

Each night we will also present an array of vintage monster and exploitation movies trailers, cartoons and concession stand classics in between the features which we know you will just love! The gates will open at 7 PM and the show will start at dusk and continue late into the night.

Where is the theater?

APRIL GHOULS DRIVE-IN MONSTER-RAMA will be held at the Riverside Drive-In Theatre in Vandergrift, PA. For the the dates of April 25 and 26, the theater will devote its screen exclusively to these special nights of vintage entertainment. The actual driving location of the theater reads as: Riverside Drive In Theatre, Route 66 N, Vandergrift, PA 15690. If you put that information as your destination on Mapquest, Google Maps, or your GPS, you can easily access directions from your starting location. The phone number of the theater is 724-568-1250 and their website is at www.riversidedrivein.com. Sponsored by DVD Drive-In (www.dvddrive-in.com).

Overnight Camping: The Riverside Drive-In is offering the choice of camping at the Drive In on Friday and Saturday night. The price is $10.00 per person/per night. The price for camping is separate from the admission price. With this we offer breakfast and use of the restrooms all night long. Makeshift showers will also be available, so you are welcome to bring towels and washrags to wash in the restrooms.

Why do I have to live so far it sounds great