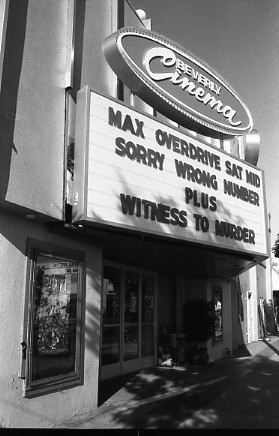 LOS ANGELES, CA — Quentin Tarantino has owned the New Beverly since 2007 but has typically only been involved behind the scenes. That’s no longer the case as he’s taken over programming full time from the Torgan family that’s operated it for decades. He’s already removed the recently installed digital projector and plans the showcase his print collection as the theatre goes back to strictly film only as opposed to digital.

Further details in Deadline as well.

(Thanks to monika for providing the photo.)

UPDATE 9/8: As noted in the comments below, Tarantino only purchased the real estate the theatre sits on in 2007, not the business.

Probably the first cinema in the country to go from film to digital to film. I would love to see more of them do it.

markp, the New Beverly did not go from film to digital to film. It simply added a digital projector to its booth 4 months ago to supplement its programming. It continued to run primarily 35mm prints, an average of 7 a week, in fact, and 35mm exhibition at the theater was in no danger of disappearing or even becoming a secondary format. Also an important correction to Cinema Treasure’s introduction above. Quentin Tarantino bought the theater’s real estate in 2007, but he did not purchase the business that operated from that real estate. It continued to be owned by the family that started the business in 1978.

Glad to hear it. Now, the theater might be worth supporting again.

I think the theatre has always been worth supporting.

Even after installing the digital projector, they still ran 35mm as much as possible. There shouldn’t be any shame in installing a digital projector when the primary commitment would continue to be to film. More than the format they shows movies in, the New Beverly stood for the overall experience you had when there. And that was a product of the tireless work of the Torgan Family for decades.

The theatre probably wouldn’t be standing today without Quentin Tarantino but the way this has all gone down is simply unsettling.

Michael Zoldessy – No, it hasn’t always been worth supporting, and I’m willing to bet that I was supporting it a hell of a lot longer than you have been.

Paying to see over-the-hill actors, child murderers, or films that show actual animal abuse isn’t worth the “overall experience” when “they shows movies.”

Let’s see if Quentin puts in a larger curved 70mm type projector and screen and the curtains working again now that he is shooting in Super PanaVision 70®. I hear It’s a very small theatre.