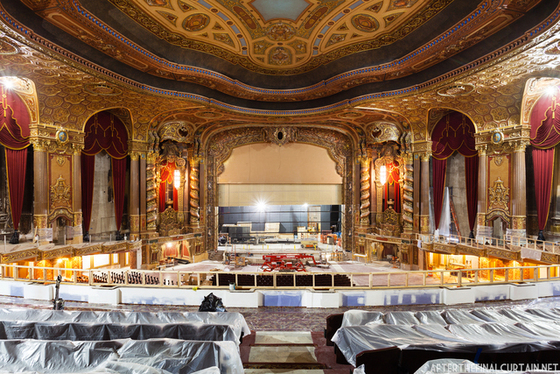 Brooklyn legend has it that a teenage Barbra Streisand pointed to the marquee of the Loew’s Kings movie palace and said, “Someday, my name is going to be up there.”

Indeed it was for 1973’s “The Way We Were,” but the grand old theater was shuttered four years later. Now the Kings is reopening its doors to the public, reborn as a performing arts center worthy of someday hosting a Streisand concert.

After neglect, water damage, looting and threats of demolition, the Kings has undergone a spectacular $95 million restoration. A ribbon-cutting ceremony Friday will be followed by a free performance by community groups on Jan. 27, an inaugural concert by Diana Ross on Feb. 3 and an open house on Feb. 7.

“After almost four decades of heartbreak, this is next to a miracle and a very big deal for Brooklyn residents,” says borough historian Ron Schweiger. “We’re going to have a beautiful new performing arts venue right in the heart of Brooklyn that will draw people from all over and revitalize the commercial strip along Flatbush Avenue.”

Many thanks to CT member HowardHaas for passing on this link.

Looks wonderful. Hope the curtain is just as beautiful. Cheers to the KINGS.

This theatre looks like the kind of theatre that deserves a good, thorough renovation! Hope everybody in the area enjoys it!

If Brooklyn can do it for the Kings, why can’t Chicago get its act together to save the incredible Uptown?

To rip off Jon:

Went there many times during the ‘60s and early '70s, had my H.S. graduation there. Always hoped this theater would be reopened. Was there for the Open House yesterday, only have two words to say: utterly magnificent.

BRAVO to LOEWS KINGS! Beautiful job! Thank you to all involved! Hopefully the LOEWS PALCE in Bridgeport (which is even bigger, 3650 seats – and in better shape) will be next to be re-born. That restoration could be the key to turning the entire Bridgeport downtown around!

Was another organ put in the King’s theatre?

The most beautiful Theatre in New York City. The former Loew’s – MGM theatre is reborn. Wish they would have left Loew’s on the marquee as part of its historical past and restored the Vertical which was done on the other Ace theatre, the Saenger in New Orleans.

I am so excited to see this I love to visit this kind of beautiful historical place. I heard a lot of story about it from my grandmother. I am getting bored in my house then I starting reading reviews of https://www.mamma.com/us/papersowl-com while reading about this I found your post. And I am so happy that I find this.