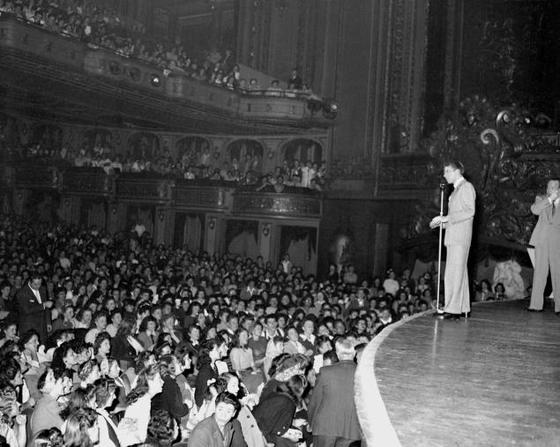 In honor of Frank Sinatra’s 100th birthday on 12 December.(Originally published by the Daily News on October 13, 1944. This story was written by Elaine Cunniffe and Gilbert Millstein.)

Thousands upon thousands of shrill, flushed pilgrims surged into Times Square yesterday, their mecca the Paramount Theatre, their prophet a languid baritone with big ears and a habit of writhing back of a microphone clutched in is hands.

They rose with the milkman. They brought their lunches, autograph books, bobby socks, short skirts and noisy ecstasy.

The crowd, four abreast, stretched from the Paramount’s gilded ticket office, right around 43d St. to Eighth Ave., from there to 44th and then eastward to Broadway. All traffic had to be detoured between 43d and 44th Sts. for about an hour before noon…Several outside swooned on schedule. One, 16-year-old Loretta Dillon of 6 Calvin St., Lynbrook, L. I., rallied sufficiently to insist upon being allowed inside to look at The Voice. Her success prompted a succession of false faints thereafter, but none was successful.

Shortly after 10 A.M., 3,600 of them were wedged into the theatre, while outside a passionate 25,000 contended with the cops. The chosen, who got inside, ripped ties from ushers and were lectured in classical music like “Old Man River,” by that great classicist, Frank Sinatra. 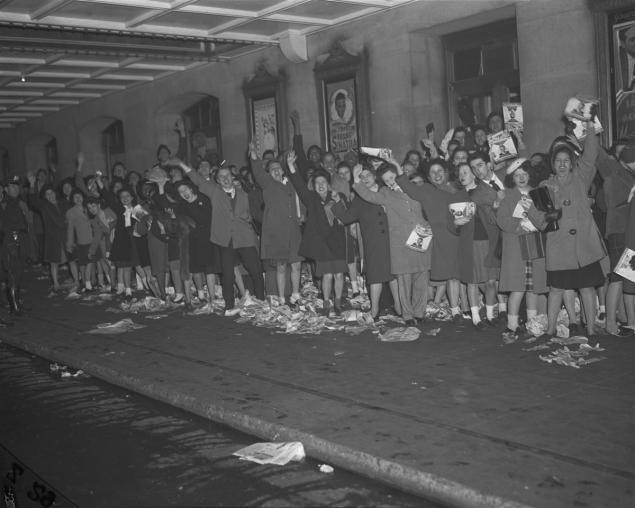 The important question is what was the movie?

The movie was “OUR HEARTS WERE YOUNG AND GAY”.