The Theatre on Your Street: Historic Colonial Theatre in Laconia, New Hampshire to be Sold 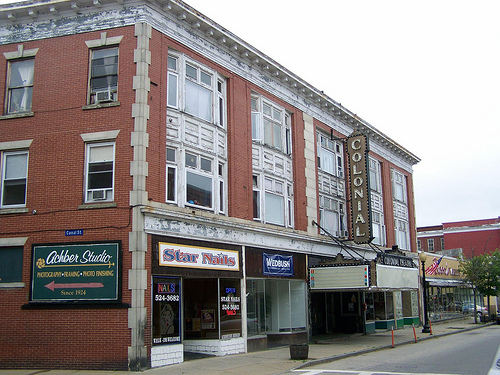 “Thanks to an historic announcement Monday, 2015 will likely be remembered in the City on the Lakes as the year the Colonial Theatre was reborn at the age of 101.

During a hastily arranged, well-attended ceremony at Wayfarer Coffee Roasters, Randy Eifert, chair of the Belknap Economic Development Council’s Board of Directors, joined by Laconia Mayor Ed Engler, said that the BEDC, through a wholly-owned limited-liability corporation, had signed a purchase and sales agreement with the Patricia Baldi Revocable Trust to acquire the Colonial Theatre for $1.4 million.

The city, said Engler, will loan the purchase amount to the BEDC, interest-free for up to 18 months, and will also lend the agency an additional $2 million to $3 million more to leverage other monies for the expected $15 million rehabilitation of the Colonial. The city will lease the 1,200-plus seat theater as a civic auditorium for seven years. – See more at: http://www.unionleader.com/artic…/20150615/NEWS02/150619390…

A note about the Colonial: From the Lake Winnipesaukee Historical Society…

“The Colonial Theater, on Main Street in downtown Laconia operated for 86 years. It was, at the time ‘One of the handsomest play-houses to be found in New England and far ahead of anything which the average city of Laconia can boast’, reported the Laconia Democrat in 1915, when the Colonial opened. It presented movies and vaudeville shows, the world premiere of ‘Return To Peyton Place’ and the music of John Phillip Sousa. Today the theater is once again operating as a movie house.

Interesting fact: The Colonial Theater is said to be haunted. Reported incidents include: footsteps heard and lights go on and off, and doors open and close when no one’s around. Visitors get a strange feeling that they should leave as soon as possible. A figure of a man has been seen".

New Hampshire Commentary reports that the Colonial opened in 1914 with 1200-plus seats under the management of Charles H. Waldron of Boston. Follow the link to see the interior of Laconia’s venerable Colonial Theater as it appeared in the early 1970s after the elegant deep red curtains were removed from the box seating areas in each side of the auditorium, and when new reclining seats were installed in the middle section; also before the whole area, including the stage were broken up to create a five-screen multiplex in 1983. The building has been closed since 2002.

Theatre historical Society of America: Learn more about historic theatres on our website at www.historictheatres.org 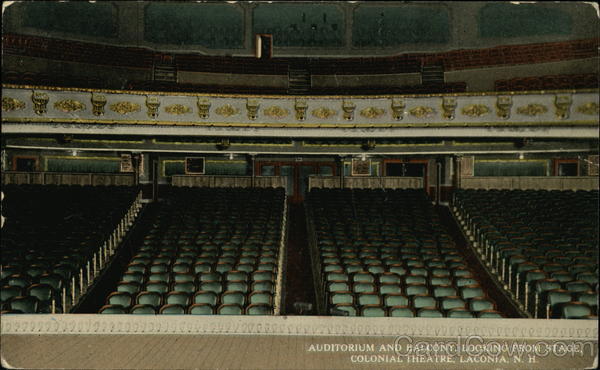 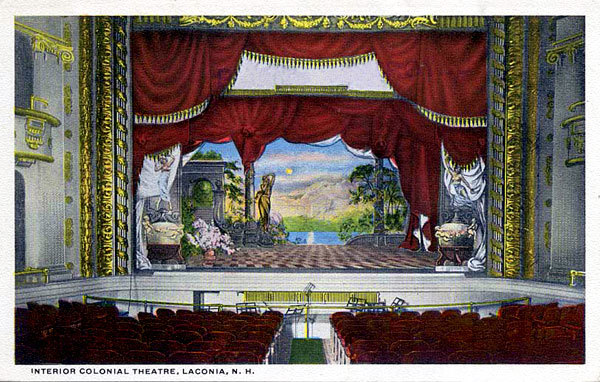