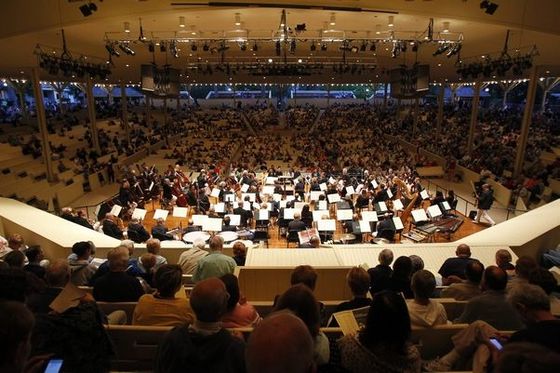 But the National Historic Landmark – the nation’s highest preservation designation – may have met its match at Saturday’s vote by Chautauqua Institution’s board of trustees.

The majority of the 24 members paved the way for the demolition of the 122-year-old amphitheater by voting to let design plans for a modern performing arts facility go out to bid. The decision, which came at the end of a nearly 8-hour meeting, reflected the administration’s view that the open-air facility no longer meets 21st-century programming and safety needs.

The board will vote Nov. 7 on moving forward with construction that, if approved, would commence in full force in September 2016…

Brian Berg, of the Committee to Save the Historic Chautauqua Amphitheater, said critics will press on.

“We fundamentally believe that a community deserves to be judged by the landmarks it preserves, not the ones it destroys. So, despite today’s vote by the Chautauqua board to proceed with plans to tear down the Amphitheater and replace it with a replica, we will continue working to save this vital part of Chautauqua’s history through public pressure and by exploring legal options.”

The outdoor theater is one of the nation’s oldest and most acclaimed venues. Susan B. Anthony, Booker T. Washington, Robert F. Kennedy and numerous presidents of the United States have spoken there. Artists from Marian Anderson to the Everly Brothers have performed on its stage.

Appeals to stave off demolition have come from regional, state and national preservation organizations, a leading theater organization, the Office of New York State Parks, Recreation and Historic Preservation and prominent individuals.

“Today’s decision is regrettable and begins the path to demolishing an irreplaceable piece of American history, and a crown jewel of the Chautauqua community,” said Stephanie Meeks, president of the National Trust for Historic Preservation, which has mounted a campaign to save the amphitheater.

“Despite evidence that the building is sound and that alternatives to demolition do exist, the Chautauqua Institution’s board of trustees chose to disregard the findings and recommendations of the historic preservation panel they created, the expertise of a structural engineer they hired and the wishes held by so many in the community they serve,” Meeks said.

Leslie Zemsky, former board chairwoman of Albright-Knox Art Gallery and a Chautauqua Institution homeowner, compared the planned demolition of the Amphitheater with the destruction of the Frank Lloyd Wright-designed Larkin Administration Building in Buffalo in the 1950s.

“Please don’t write the 21st-century version of this,” Zemsky said in an appeal to the trustees last week, which also appeared in The Buffalo News.

my deepest condolences, remember our dearly departed are just not in our presence,they are now within our souls.