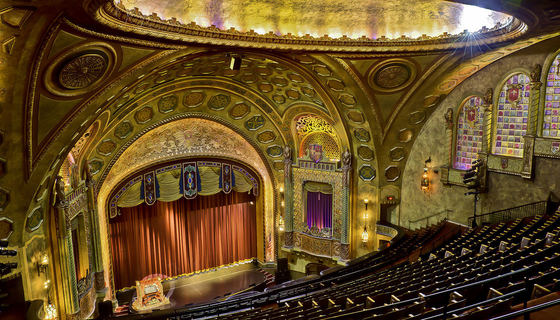 From the National Trust for Historic Preservation – “Home to what was the world’s largest Mickey Mouse Club and acts featuring the Marx Brothers and May West, a few Birmingham, Alabama theaters take center stage in preserving and archiving the city’s complicated history from the early 20th century through the Civil Rights movement.

In the Winter 2016 issue of Preservation magazine, you get a glimpse of the Lyric Theatre, one of Birmingham’s historic theaters that is currently undergoing a comprehensive restoration and renovation. We decided to take another look at this and some of the Magic City’s other historic venues that have been restored and stewarded by the local community.

Constructed in 1927 by Paramount Studios, the Alabama Theatre was built as a classic movie palace characterized by its opulent architecture influence by Art Deco designs of the time (the landmark Chicago Theatre is another famous example of this style). The Alabama, located in Birmingham’s historic theater district, was primarily used as a movie house and soon became known as the home to the largest Mickey Mouse Club in the world; it boasted over 18,000 members before closing almost 10 years after its 1933 organization.

Now known as the Carver Performing Arts Center, the Carver Theatre was opened in 1935 as one of the first movie houses for African-Americans to see first-run films. Located in the Fourth Avenue Business District that housed much of the African-American community businesses and entertainment venues, the Carver was modernized in 1945 before slowing falling into disrepair and eventually closing in the 1980s. Before its decline, the Carver, sponsored by a local bottling company, was known for accepting bottle caps as payment for the children’s shows that were screened on the weekends.

Located just across the street from the Alabama Theatre, the Lyric Theatre is currently undergoing an $11 million restoration project, highlighted by the relighting of its iconic marquee in 2013. The theater was originally constructed in 1914 for vaudeville mogul B.F. Keith’s theater circuit—featuring acts like the Marx Brothers and May West—but quickly fell into disrepair following the rise of moving pictures."

Read more about these great theatres on the Preservation Magazine website: https://savingplaces.org/stories/act-two-a-look-at-birmingham-alabamas-historic-theaters#.Vorcpk88wzo

The Alabama Theatre was influenced by art deco designs? I’m not seeing that. And the Chicago Theatre was certainly not an example of art deco. The art deco style had not yet emerged at the time of the Chicago’s opening in 1921. And who was “May” West?

Alas, another example of the “youth movement” we “old-timers” have to tolerate today. I have to feel sorry for future serious historians having to wade through the over-enthusiasm of amateur historians who have gravitated to this site.

I have long ago become jaded to articles which proclaim ANYTHING architectural or artistic from the 20s and 30s and 40s to be Art Deco, whether it is or not. It seems trying to prevent this has become a lost cause.