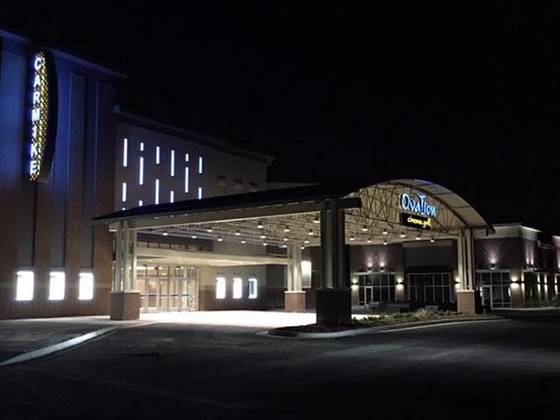 The nine-screen Carmike Cinemas movie theater will open at 320 Grand Hill Place in the northeastern portion of the Holly Springs Towne Center. The grand opening day showing first-run features will be Thursday, Oct. 13.

The preview days, which are Wednesday, Oct. 5, through Tuesday, Oct. 11, will feature recently released films, including “X-Men: Apocalypse,” “The Conjuring 2” and “Star Trek: Beyond.” The movies on these days are $3 with proceeds benefiting local schools, the Holly Springs Food Cupboard and Meg’s Smile Foundation, a nonprofit that provides special days out or gifts to North Carolina children affected by serious illnesses.

The venue has full-service dining, where moviegoers can order food and drinks, such as grilled shrimp tacos and a barbeque chicken flatbread, while seated in electric, luxury recliners that allow them to request service at their seats. The theater has an outdoor patio, as well as a cocktail lounge in the lobby with a full service bar. The bar will serve craft beers from three Triangle breweries: Carolina Brewing Company in Holly Springs, Aviator Brewing Company in Fuquay-Varina and Bull City Ciderworks in Durham.

“We are pleased to offer this exciting cinema dining experience in Holly Springs, said David Passman, president and CEO of Carmike Cinemas, in a news release. “The Holly Springs location is our first cinema dining facility built from the ground up, and we are thrilled to give the community a new way to experience the movies.”

This new theater will serve more than just Holly Springs, but the large swath of southwestern Wake County. The closest theaters are in nearby Cary, Morrisville and Apex, but the closest two theaters – Regal Beaver Creek Stadium 12 in Apex and CineBistro in Cary – are each 15 minutes away from the new site.

This is the third theater to open in western Wake County that has full-service dining. In addition to CineBistro in Cary’s Waverly Place, Frank Theatres opened a CineBowl & Grille in Parkside Town Commons, a mixed-use development on N.C. 55 near N.C. 540.

The Holly Springs theater is part of the second phase of development of Holly Springs Towne Center. Indianapolis-based Kite Realty Group is the owner and developer of the project, which began construction in 2012.

Since then, about 40 restaurants and stores, including Target, Michaels and Marshalls, have opened, and the shopping center continues to grow.

“It’s kind of put Holly Springs on the map,” said Moss Withers, chairman of the Holly Springs Chamber of Commerce board of directors.

Several other businesses will open later this year. Those tenants are Blaze Pizza, Mi Cancun Mexican restaurant and a nail salon. Hughes said Texas Roadhouse recently signed a lease and would open next year.

“There should be more announcements coming soon,” he said.

Over the years, the town has sought to offer enough amenities that residents won’t have to leave for shopping or entertainment, and a movie theater is another step toward meeting that goal, Withers said.

But Withers added there aren’t many big businesses in town, meaning that residents still have to go to Cary, Raleigh or Research Triangle Park for work.

“We’ve got the retail now, which is great, but we’re not there yet,” he said. “Little steps like this movie theater are good steps in having the amenities and conveniences to bring businesses to the market.”

Question: Since the cinema has nine screens, do you know how many seats does the Ovation Cinema Grill has? E-Mail