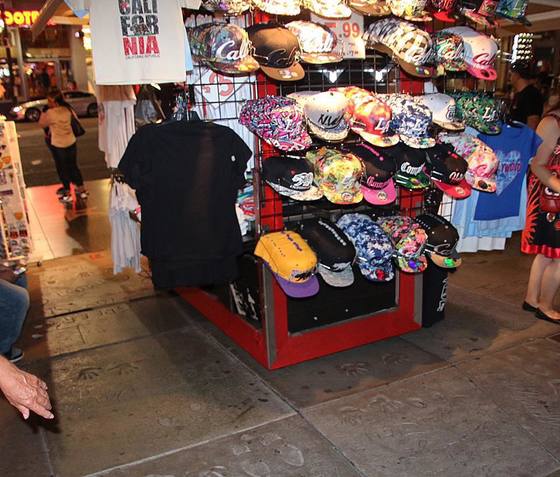 From Curbed LA: Visitors to Hollywood hoping for a classic photo-op pressing their hands into the prints of one of their favorite Hollywood luminaries may be a bit disappointed to discover that many of the iconic, concrete-preserved prints and celebrity signatures in the TCL Chinese Theatre courtyard have been covered over by another well-known Hollywood attraction: cheap souvenirs.

On Friday, the Vintage Los Angeles Facebook group posted a photo showing a rack of hats and t-shirts taking up a good-sized chunk of real estate next to Bette Davis’s handprints in the famous courtyard. As the post notes, the souvenir cart appears to be covering up the signatures of both Jean Harlow and Lana Turner.

The post has attracted an enormous amount of attention, garnering hundreds of comments from mostly outraged Facebook users. Soon after the picture was posted, a Change.org petition was created urging TCL Theatres, as well as the Los Angeles Historic Theatre Foundation and the Hollywood Chamber of Commerce, to take necessary steps to remove the carts from the forecourt. So far, it’s gotten more than 2,100 signatures.

At least one of the groups the petition targets has already made clear they aren’t too concerned about the issue. Historic Theatre Foundation Director Escott O. Norton took to Facebook to support the theatre’s decision to allow the souvenir stalls on site.

“I personally do not see it as the disaster that some are making it into,” Norton said. “The Chinese Theatre is a business, not a museum, and whether one person or a million people walk into the Forecourt to take a selfie with their favorite star’s footprints, they make no money to pay for insurance, maintenance, upkeep or improvements.”

It’s not clear how much theatre owner KLM Equities, Inc. stands to make renting space to the owners of the stalls, but perhaps the proceeds will help pay for the $15.6 million Tesla store the firm just acquired.

The new disco owners that run Graumans Chinese Theatre just want cash for tourist rentals any way they can get It. They even run tours $$ inside the former famous theatre now turned into a Imax cinema when a movie is going on, very distracting when you are trying to watch a film and hear the tour group wandering around in the dark.

The tours happen in between screenings. I have NEVER saw a tour happening during a film!

Vintage Los Angeles posted a new photo today (10/3) Most if not all the stall are gone. A protest happened this morning as well.

Hope they brought back the palm trees in the courtyard of this great theatre. I heard the interior was updated and refreshed. Anyway to save an iconic historic place like this. Of course it needs to make money.

I’m a semi regular attendee. Big movies pack in the place on Saturday nights. Smaller ones, not so much. Ticket price is INSANE (over $20 – 3D OR NOT!) but I still support it.