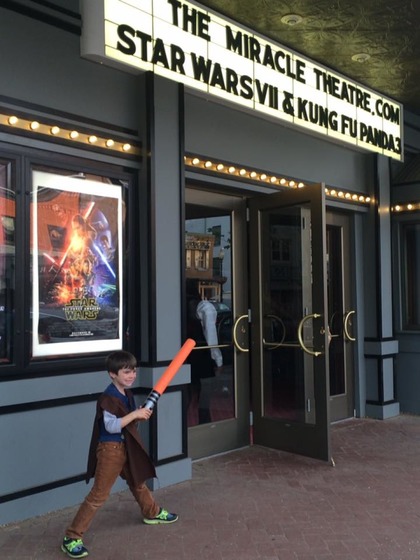 The building that houses The Miracle Theatre, which had its soft opening on April 22, hosted movies and vaudeville shows in a previous life as Meader’s Theater, which opened in 1909. Miracle, which is owned by the National Community Church, is intent on celebrating that history. “We knew we wanted to revive that history for the community,” says Miracle Theatre manager Juliet Main. When the NCC purchased the building in 2011, she says they begin researching its history and decided to furnish and decorate it like a 1920s movie theater.

In addition to showing second runs of new movies, Main says the theater will also host special film series, repertory cinema, and will be used as a live performance venue. “Since we’re setup with a stage, we want to do special events,” she says.

Thus far, some of those special events have included a screening of local documentarian Laura Waters Hinson’s latest film Many Beautiful Things: The Life and Vision of Lilias Trotter with a post-screening Q&A, post-screening panel discussions of Batman V Superman: Dawn of Justice with local superfans, and, on Friday, a screening of The Beatles classic A Hard Day’s Night.

But those looking to sneak away to the theater for a midday weekend screening might be disappointed: The NCC uses the space as its church on Saturdays on Sundays. According to Main, the NCC opened The Miracle as a nonprofit theater, with “any profits going back into the community.” Asked it The Miracle Theatre’s programming will be influenced by the church, Main says that it’s a “general audience movie theater for the community.”

“Our programming vision is to celebrate great art, music, etc.,” she says.

Link to the story: http://www.washingtoncitypaper.com/arts/blog/20781032/miracle-theater-opens

Recollecting now, my way to “A Course in Miracles” logical completely started in 1969 when I recognized Jesus my own Lord and Savior, influenced by the Campus Crusade for Christ. Regardless, in the wake of joining a Christian association jesus of nazareth acim of attempting ministers, where I was each day tried on the quantity of Bible holds back I had recalled and could describe in exactly the same words, I was totally bewildered by everything. Their transformation of reality basically disagreed with me.

It is just with the delicate direction of the Holy Spirit that we can achieve this forgetting learning measure. Remedy is just in the brain of the perceiver and not through a course in miracles book structures as evident decision is between listening two voices: God or the conscience. Cases to be of a “wonder mind” is actually the inner self, absolution to-obliterate and otherworldly uniqueness. The self image talks first and the most intense. Love is peaceful; and love is communicated in this world through right-disapproved of pardoning.