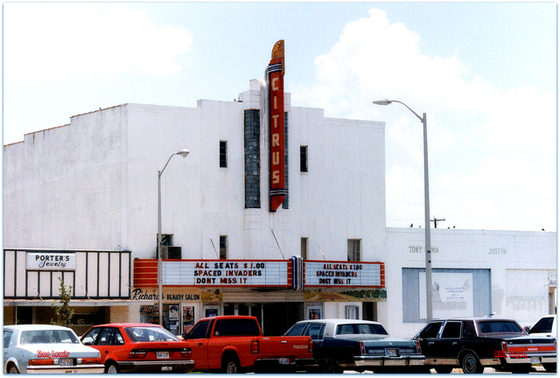 From KRGV.com: An Edinburg attorney is working to restore a movie theater built in 1941. Felipe Garcia said the Citrus Theater has historical significance and brings back memories for him and lots of people in the city.

“It was pretty much the only building of its type in the city of Edinburg that was air-conditioned besides the courthouse and things like that,” he added.

The theater, which showed all first-run movies, is across the parking lot from the Hidalgo County Courthouse. Garcia bought it 20 years ago.

“I’ve tried to maintain it from the standpoint of keeping everything intact that was in there. The chairs, the old projectors are still there,” he said.

The Citrus Theater was the dream of an Edinburg doctor and his wife. In 1939, in an alleged jealous rage, the doctor shot and killed his wife. He then used the insurance money to build the theater.

The theater has two balconies and a total of 800 seats. Movie patrons left their marks. There are scuff marks where people put up their feet against the wall near the front row. Garcia pointed out a spot with “circular grease stains, where guys that were there with their dates would rest their heads back there.”

Citrus murals decorate the theater’s entrance. “During one of the renovation projects, they painted it over, but we managed to restore it,” Garcia explained.

As for the doctor who built the theater, he included his office inside of it. His exam rooms are still there, and he built a side entrance for himself and his patients.

Garcia invites anyone interested in learning more to visit the Citrus Theater Edinburg TX group on Facebook. That’s where he shares photos about the theater and its history.

Article, with video, at: http://www.krgv.com/story/32739475/attorney-working-to-restore-edinburg-theater 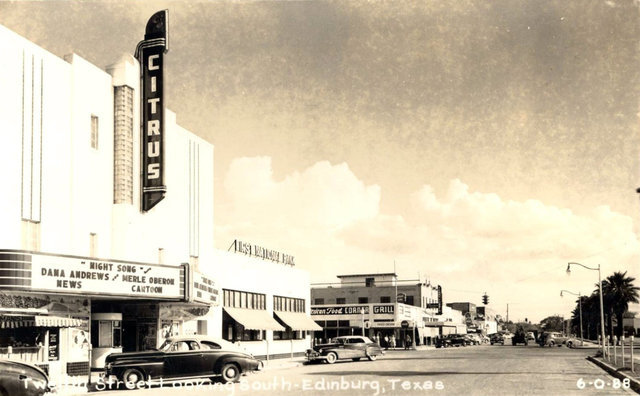