Medford, OR - Historic Holly Theatre on track to begin construction in 2017 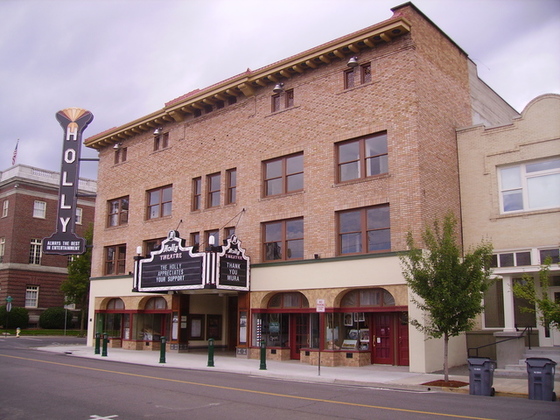 From the Mail Tribune: Although the Holly Theatre will spend its 86th birthday with floors uncarpeted and air unconditioned, organizers have high hopes for the historic building in the year ahead.

Randy McKay, executive director for Jefferson Live!, which manages the building, said the planning stages are nearly complete for the theater’s restoration project to get underway in earnest. After months of effort and recent meetings with sound, lighting and theatrical rigging companies, McKay spent last week finalizing various design plans for the building on Sixth Street in downtown Medford, with the intention of turning estimated costs into actual ones. Preliminary fundraising figures, which McKay said will be updated Monday, show a total of $2,963,750 raised from approximately 1,700 donors, achieving more than two-thirds of a $4.3 million goal.

When construction begins, monthly tours of the historic theater’s four floors — peppered with drawings, historic photographs and renderings — will come to an end.

“If anybody wants an opportunity to take a tour, they’d better hurry,” McKay said.

McKay plans to announce 2017 construction dates for the interior of the theater, pending continued fundraising success. The construction efforts would begin in the fall, however, with formal requests to bid on the various pieces of the project.

“I am pretty certain we’ll announcing something in the fall,” McKay said.

McKay, who has been involved with two California theater restorations prior to the Holly, says the momentum built from volunteers and the community will carry the theater to its completion.

“Once a project is this far along, it’s a foregone conclusion,” McKay said.

The design planning can be a challenge, McKay said, because some specialized equipment and systems have the potential to interfere with others.

“Building a theater is a lot like building a hospital,” McKay said.

Board member Ron McUne said original examples of all pieces of the theater have been obtained. After the city condemned the theater in the early 2000s because of its missing roof and damaged roof truss, many of the historic building’s pieces were parted out in the belief the building would be torn down, McUne said.

But as renovation efforts have taken shape in recent years, locals have come forward with lights, fixtures and other pieces, providing restoration experts necessary examples.

The theater, with ornate decoration loosely themed around Venice, had a dressing rooms and other fixtures, despite its primary use as a movie house. The state-of-the-art theater was equipped with space for pipe organs left and right of the stage. In an era when film reels were prone to ignition, steps were taken to protect the audience with an all-metal projection room with metal doors that would drop if a fire broke out.

Archives show the first film shown at the theater was a Technicolor musical comedy titled “Hold Everything,” which opened with a local revue act known as “Holly’s Follies.” The final film before the theater’s unceremonious closure in 1986 was the Wes Craven science fiction horror film “Deadly Friend.” 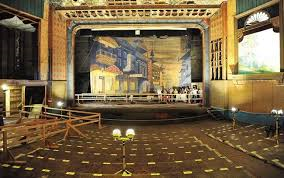