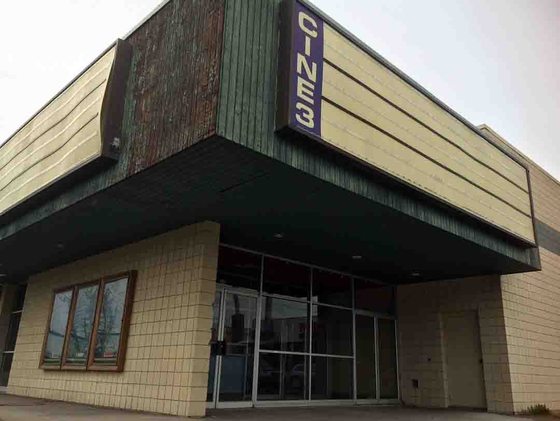 From The Missoulian:
A vacant movie theater in Missoula that has become a magnet for crime soon will be torn down to make way for a new bank.

The Missoula Redevelopment Agency’s Board of Directors has approved a request from Stockman Bank to proceed with demolishing the old Cine 3 movie theater building at 3601 Brooks.

The bank intends to construct a new two-story bank building and one other commercial or office building at the site. It’s expected to be complete within two years because the ongoing construction of a massive new six-story Stockman Bank building downtown is occupying the company’s resources.

However, the current movie theater building – which has been vacant for 10 years – has apparently become an immediate problem for both the owners and the Missoula Police Department because it has been frequented recently by people engaging in illegal activity.

“The owner is regularly cleaning up used syringes and empty alcoholic beverage containers, and the rear of the building has become a dumping ground for abandoned vehicles,” said MRA executive director Ellen Buchanan in a memo. “Neighboring businesses are increasingly expressing concern about vandalism and criminal activity.”

She added that Missoula Police Chief Mike Brady has requested increased patrols around the building, but there continue to be issues. Brady has also asked that the MRA help expedite the removal of the building and the cleanup of the lot.

The bank asked to proceed with demolishing the building without prejudicing any future requests they may make for Tax Increment Financing (TIF) assistance, because the site is in an Urban Renewal District.

Randy Rupert, the regional director of business development for CTA Architects, is working for Stockman Bank on the building. He said that the bank is ready to demolish the current building within four or five weeks.

“Two weeks ago we got broken into again,” he said. “It’s been blighted long enough for the city of Missoula. People know the building’s empty and they find ways in. It’s probably the only deserted property around there.”

The bank plans to recycle as much of the materials from the deconstruction as it can.

The Missoula Redevelopment Agency’s board also approved a request from the Missoula Housing Authority to proceed without prejudice on moving forward with prepping the site at 110 N. California St. for a new six-unit affordable housing complex. The MHA has been awarded a $700,000 state grant for the project, but they need to get going in order to not jeopardize the funding. Each unit will be one-bedroom.

The board also approved a $79,720 TIF request from the North Missoula Community Development Corp. to deconstruct the existing house at 503 E. Front St. to build seven affordable housing units. The NMCDC will own the land, and sell two-bedroom units for around $130,000, and four-bedroom units for around $150,000, well below market value. However, the resale value of each unit is capped so that they remain affordable for future buyers while still rewarding homeowners for the equity they’ve put in as good caretakers.

“It’s really exciting for us to get some permanent affordable homeownership downtown, which is an extremely rare commodity,” said Jerry Petasek of the NMCDC.

Finally, the board approved a TIF request of $22,216 from the owners of the 16-unit apartment building at 534 E. Front St., on the corner of Madison Street, for sidewalk improvements. The owners are renovating the entire building, and the taxpayer money will go to fund right-of-way improvements.

Link to the story: http://missoulian.com/news/local/stockman-bank-gets-permission-to-demolish-old-cine-movie-theater/article_2402aee3-8568-5f7d-bda3-39ea1ea8e108.html

I think these buildings had served thousands of people already, and ready to retire. “The owner is regularly cleaning up used syringes and empty alcoholic beverage containers, and the rear of the building has become a dumping ground for abandoned vehicles,” Buchanan stated in a recent city memo. “Neighboring businesses are increasingly expressing concern about vandalism and criminal activity.”

Stockman Bank has plans to construct a new branch office at the location, though that project isn’t likely to begin any time soon. The company is currently constructing a new facility in downtown Missoula – a six story structure that will serve as the bank’s western Montana headquarters.

Randy Rupert, regional director of business development for coworking space newcastle architects, said the bank would like to proceed with demolition as soon as possible. It will then ask MRA for reimbursement once construction of the new bank is ready to move forward.