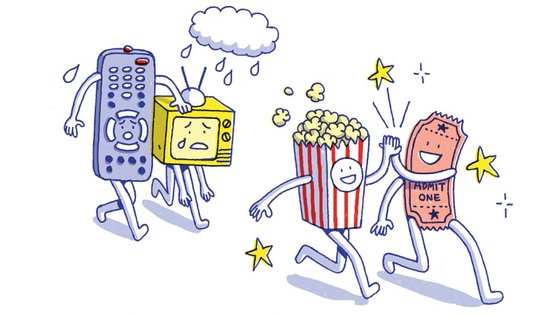 From The Hollywood Reporter: New technology is shaking up the entertainment business, but John Fithian, president of the National Association of Theatre Owners, argues that box office is thriving even as TV and home video take a hit and streaming services up their investments. “Three-fourths of (those) interviewed are spending more evenings at home now. Slightly more than half are going to the movies less often, although formerly they were confirmed and in most cases very heavy moviegoers.” — U.S. News & World Report

You’d be forgiven if you thought I was talking about today, the internet and movie streaming services like Netflix and Amazon. The report above actually is from 1955, the disruptive technology was television, and the disruption was real. There were other factors, such as the Paramount Consent Decrees, which forced studios to divest their movie theater properties, but the body blow to theaters that television represented was a complete revolution in the entertainment ecosystem. Theaters no longer held a monopoly on recorded audio-visual entertainment, and box-office revenue hit bottom at $875 million in 1962, down 48 percent from 1946, with admissions off 78.5 percent. The box office would not return to 1946 levels until 1974.

But what about today? Have the internet and movie streaming to the home caused a fresh disruption in the theater industry?

Despite a fairly constant drumbeat of impending doom and decline facing the cinema industry, the reality is otherwise. Since 2004 — following two rather anomalous years that peaked at over 1.5 billion admissions — movie admissions have moved up and down over a fairly narrow range, from 1.27 billion to 1.48 billion annually. Some of that fluctuation is a reflection of the movies in the marketplace, and some is surely because of increased competition from the home market.

But two elements that go hand in hand with increased home competition have been a remarkably weak economy and labor market. Although it often is said that moviegoing is “recession proof,” the reality is that, as a low-cost out-of-home option, moviegoing is recession resistant. Yet since 2001, the economy has endured two recessions and periods of growing unemployment. Unemployment rates from the 2002-03 recession had barely returned to previous levels when the credit shock of 2008 sent the economy into a tailspin and brought on unemployment rates above 10 percent. The unemployment rate has only returned to pre-2008 levels in the past year; the median household income has only just returned to what it was in 2000.

And how have theaters fared? Since 2000, domestic theatrical revenue has increased 51 percent — from $7.5 billion to $11.37 billion in 2016. Some analysts will downplay that performance by noting that this has been accomplished through increased pricing rather than admissions growth, but that suggests that theaters have done nothing but raise their prices. Since 2000, the cinema industry has all but reinvented itself: stadium seating with improved sight lines, the overhaul of the industry’s basic technology from film to digital projection (purists will argue here for the superiority of film over digital in pristine conditions, but it is inarguable that digital projection has raised the quality of presentation for most moviegoers far above what was possible with film under real-world conditions), digital sound, premium large-format screens, cocktail and food service in the auditorium and the latest widespread innovation ­— luxury power recliners. All those billions of dollars spent on improving the moviegoing experience come with an average ticket price that, adjusted for inflation, is lower than it was in 1976. That $2.13 ticket in 1976 would cost $8.98 in 2016, when the average ticket price was $8.65. The cost-conscious consumer hasn’t been forgotten, either. Movie theaters offer discounts for matinees, students, the elderly and across much of the industry, lower-cost weekdays (typically Tuesdays) have increased weekday attendance.

Since 2004 — the peak of home entertainment retail revenue, at $24.9 billion — revenue has dropped 51.6 percent to $12.05 billion. As retail revenue has fallen, the Digital Entertainment Group, which tracks DVD and Blu-ray sales, has taken to including subscription VOD revenue (more akin to premium cable channels like HBO and Showtime) in its annual accounting (adding another $6 billion). How much of that content is episodic television and how much viewers actually watch is not disclosed, and that revenue shouldn’t properly be part of the home video equation.

No one disputes that the fare on streaming services is wildly popular and that companies like Netflix have pushed its spending ­— on new episodic content in particular — to astronomic levels, but that spending increasingly is going into a market that is seeing diminishing revenue per transaction.

If the choice is diminishing revenue on increasing viewership versus increasing revenue on fairly stable admissions, I know which one I would take. It is the missing revenue in the home market that drives most of the angst in the entertainment industry.

A weak economy and cheap home entertainment options have eroded theatrical admissions at the margins ­— people watching their pennies and already paying for cable and a video subscription service might take a pass on movies they don’t consider “must see” (while sometimes opting for a sure thing; admissions to $100 million-grossing movies have grown from 704 million in 2004 to 750 million in 2016 — up 6.5 percent). But continual investment and a sharp attention to evolving customer demands not only have seen movie theaters through tough times but also have allowed them to thrive. Box office has topped $10 billion domestically for seven straight years, $11 billion for two straight years, and set records in five of the past seven. The entertainment industry might be in the midst of disruption, but it’s not happening at the movie theater.

After a hard day at work, among us is a terrific game to enjoy in your leisure time; if you want, come visit and play with me.