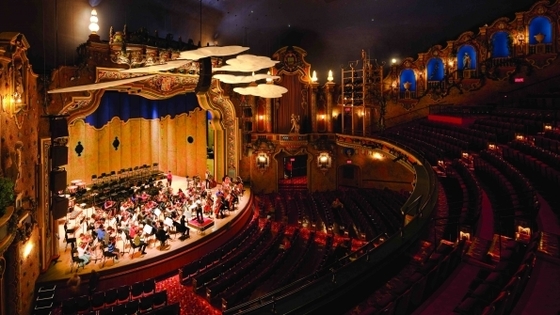 From Live Design: Among the beautiful acoustical shells Wenger has worked on over the years, many showcase the artistry of Brooklyn-based EverGreene Architectural Arts. This week we’ll focus on this renowned company and their unique niche; we’ll also highlight a notable joint project.

Jeff Greene, EverGreene’s Chairman, founded the company in 1978 after what he describes as “a series of left turns”. He had trained as a fine artist – a painter – and was interested in creating public art murals. Working on fresco painting inspired Greene to study architecture, which eventually led to architectural restoration and conservation work.

The firm has prospered, today employing 200 people. Next year marks their 40th anniversary. “In a certain way, I think we succeeded because there was a market niche not being filled,” he recalls. Greene says his Type A personality inspired him to meet the challenge and keep pushing.

Creative Problem-Solving. He considers EverGreene’s uniqueness to be their broad scope of work and holistic approach to the decorative arts. Their portfolio ranges from civic and sacred to commercial and theatrical, including work on nearly 400 theaters.

From the 1910s through the 1950s, Greene says theater styles varied as widely as their uses: vaudeville, cinema, concerts, opera, etc. Today, because of their rarity, these historic theaters often inspire community pride and funding support. “But this doesn’t mean unlimited restoration budgets,” he remarks. “There are always economic constraints.”

Having restored so many theaters of every imaginable style, Greene says his firm is always interpreting the architect’s vision to some degree. “We understand architectural styles and history and our conservators and craftsmen are well-versed in historic materials and methods of construction,” he explains. “We approach each project creatively and thoughtfully. Our depth of experience and problem-solving mean we’re not always reinventing the wheel.”

Greene notes that many of the grandest historic theaters across the U.S. have already been restored, which means EverGreene is revisiting its projects from 20 or 30 years ago for upgrades, maintenance and repairs.

Changing Technology. Even though much of EverGreene’s work is historic, the company embraces new technology like digital printing and stencil cutting to accomplish the work. And while there may be cost savings with these advancements, Greene says any new technology also has limitations.

He recalls a recent project where another vendor enlarged a stage curtain’s design – visualized on a desktop computer monitor – to an enormous 25’ x 35’ size. All the detail was lost in the enlargement process; the end result looked terrible.

In contrast, EverGreene’s approach to create such a large-scale digital reproduction would be first creating a full-sized prototype, hand-painting it and then photographing it with the highest possible resolution to capture more detail than the human eye can see.

“We’re not in a race to the bottom – compromising quality in the quest for cheaper and cheaper,” says Greene. “Like Wenger, we want to craft something that’s well-built and durable – something with aesthetic quality and long-term value.”

Improving computer capabilities enable EverGreene to help clients visualize projects in 3-D, where once it was necessary to create handmade scale models. In a similar way for its acoustical shells, Wenger also utilizes 3-D design software that enables the shell’s complex components to be almost assembled on-screen. In the past, some custom shells would have required Wenger to build a model to verify fit and function.

‘Atmospheric’ Shell. Several years ago, EverGreene and Wenger collaborated on the stunning acoustical shell at the Carpenter Theatre in Richmond, Virginia. Opened in 1928, the Carpenter was one of the original ‘atmospheric theaters’ designed by John Eberson. EverGreene handled the interior restoration, including the auditorium’s side walls designed to resemble building facades, complete with balconies, statues and inset niches glowing blue from the simulated “twilight” lighting behind them. The domed ceiling was painted dark blue and features twinkling stars.

To continue this feeling of skyline depth, Wenger sandwiched together two 2” thick tower panels. The ‘blue sky’ Diva panel in back recedes behind the ‘city wall’ Diva panel in front.

Wenger constructed niche boxes, or insets, in six of the 11 Diva wall towers, inspired by the niches in the auditorium’s walls. While the auditorium niches contain statues, the shell’s niches are simply insets featuring hidden lights that create a bluish, twilight glow.

EverGreene executed the Carpenter’s creative shell painting on-site. For some shell projects, Greene says designs are digitally printed on canvas and then installed. We appreciate our long-term relationship with EverGreene, which results in theaters that look as splendid as they sound.

Hi, I love to know about historic places, And I am glad that I found your post, I also want to visit that place, but I didn’t have enough money, I am playing the best online slot games where I can earn real money. After earning lots of money I will definitely visit here.

Hi, I have seen lots of historical theaters. But this one is the best. I am facing some financial problems, So I am thinking about playing online casinos to earn money. So I am reading how to choose the best casino on https://casinosanalyzer.jp/ and while reading about it. I am glad that I found your post.