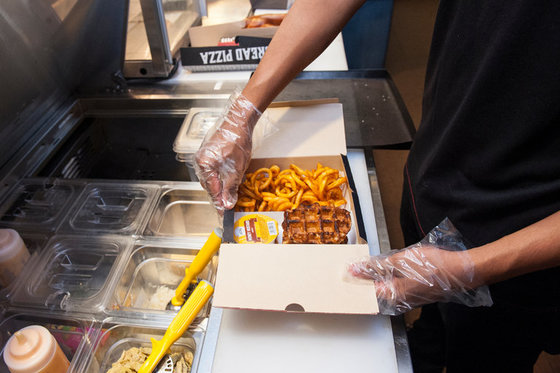 From The New York Times: Adam Aron, the chief executive of AMC Theaters, the largest multiplex chain in the world, sat in a hotel suite here last month and sang the praises of a new menu item he called “the Bavarian Beast.”

It’s a pound-and-a-half salted pretzel the size of a steering wheel. “There’s also a new jalapeño-flavored Southwestern dog that’s to die for,” he said. But Mr. Aron was most effusive about another new AMC offering, a juicy chicken sandwich with waffles as buns.

“Sounds fattening just to hear it described,” he said with a smile, “let alone when you eat it.”

Popcorn, candy and soda? How quaint. The concession counter at your local AMC is about to turn into a full-fledged fast-food restaurant.

It’s part of a strategy to attract younger audiences and stay relevant in the streaming age of HBO Go, Netflix and Amazon Prime. While small theater companies like the 25-location Alamo Drafthouse have been offering full-restaurant cinemas for years — AMC itself already operates a 60-location chainlet of Dine-In Theaters — this effort will bring greatly expanded menus to more than 400 theaters in the United States.

“And, yes, we now have a curly fry in the portfolio,” said Nels Storm, AMC’s senior culinary director, sounding like a proud papa. “We wanted to think more like a restaurant company.” Mr. Storm promoted the offerings as the most important advancement in multiplex concessions since the invention of the armrest cup holder.

AMC Feature Fare, which will begin rolling out nationwide this summer, comes with risks, starting with the cost of installing equipment and retraining staff. Mr. Aron said AMC planned to spend $700 million on theater upgrades in 2017. (That includes improvements well beyond food, including reclining seats.) Some patrons may not be thrilled to find themselves seated within sniffing distance of those curly fries and salami snacks. (Talk about Smell-O-Vision.)

“Time to pack a bottle of ketchup in my purse, I guess,” Jeanine Basinger, founder of Wesleyan University’s film studies program, said with a dose of sarcasm. “And wet wipes.”

AMC’s new menu, while including higher-grade ingredients (all-beef hot dogs, for instance) and some healthier options, leans awayMr. Aron, who was in Las Vegas for the annual CinemaCon movie-theater owners convention, noted that AMC’s culinary staff had spent a year testing ideas for menu items at the company’s headquarters in Leawood, Kan.

It’s trickier than you might imagine, said Mr. Storm, the culinary director.

“You have to be able eat in the dark while still paying attention to Hugh Jackman doing something crazy,” Mr. Storm said.

The AMC Feature Fare team also thought about smell. In some cases, Mr. Storm said, the goal — as with popping popcorn — is actually to create an I’ll-have-what-they’re-having waft.

“If it’s a smell that we feel will complement the experience,” he said, “we will promote it.”

from low-fat, froufrou choices and hard into indulgence, which could provoke the obesity police. AMC has also been installing “freestyle” Coke machines that offer more than 100 flavors.

But Mr. Aron, who took over AMC in 2015 after serving as chief executive of Starwood Hotels & Resorts, has made giving the masses what they want a hallmark of his early tenure. In many ways, food is the last component. AMC has already been aggressively installing advanced Dolby sound and projection systems, extra-wide screens, and La-Z-Boy-style seats. AMC now serves alcohol in roughly 200 of its 660 domestic theaters, with plans to add 100 more this year.

It seems to be helping: After three consecutive years of declines, in 2016 the number of frequent moviegoers ages 18 to 24 in the United States and Canada increased 26 percent, to 7.2 million, from 5.7 million in 2015, according to a recent report by the Motion Picture Association of America. (Frequent moviegoers are those who went to see one or more films a month.)

Even so, AMC cannot stand pat. Over all, domestic attendance was flat last year at 1.32 billion. Under pressure to increase profits, multiplex chains can increase ticket prices only so much before driving attendance down. That means the concession counter must work harder. Analysts say tens of millions of patrons buy tickets but never snacks. 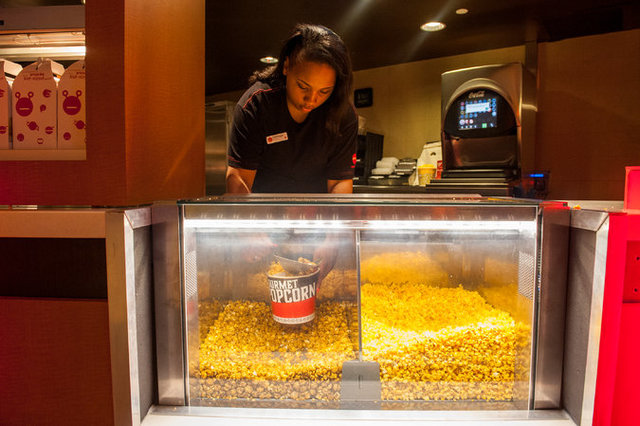 People constantly think about popcorn when watching movie at cinema. Eating sounds can ruin experience, and the smell of savory food is annoying. https://www.celebnetworthpost.com

Looking forward to you sharing more information, I have been looking for it for days. mapquest directions