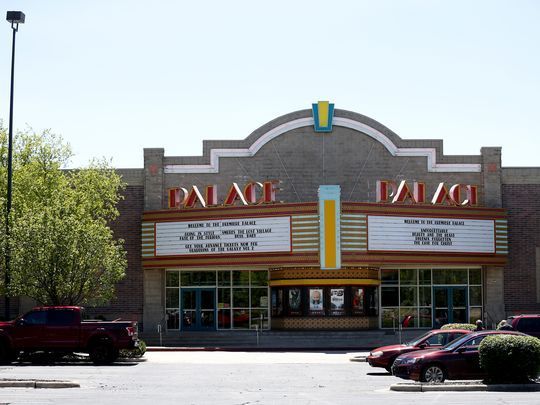 From the Springfield News-Leader: Some neighbors and business owners near a south Springfield movie theater don’t want to see it turned into a church. They’re signing petitions in protest.

The Premiere Palace, located in Chesterfield Village, is under contract to be bought by Life360 Church, which is looking to relocate its nearby Park Crest campus to the 29,000-square-foot theater at 2220 W. Chesterfield St.

Deby McCurter, who has lived in Chesterfield Village for 15 years, said she’s worried that losing the movie theater will be a hit on property values and the tax base.

Leo Crosby, the executive pastor of Life360 Church, said representatives from the church have met with Chesterfield Village residents and organizations.

“We’re listening to them and hearing their concerns,” Crosby said. “We’re just looking forward to becoming part of the Chesterfield community.”

Crosby said the sale of the theater to the church is in its “due diligence phase” and is contingent on the approval of a rezoning request that will be voted on by City Council in June.

The proposal would rezone the property from a planned development district (this specific one does not allow for churches) to a general retail district.

McCurter said she and her husband walk to the movie theater almost every week.

“We’ve lost a lot of sleep over this,” McCurter said. “This is our neighborhood. We don’t want it to change.”

McCurter and other neighbors have been circulating petitions that they plan to present to City Council in an effort to save the theater.

One is a legally binding protest petition aimed at people who own property around the Premiere Palace.

If 30 percent or more property owners within a particular geographic area sign the protest petition, then the council vote must have two-thirds majority to pass the proposal.

Another is a general petition for anyone who wants to express opposition to the rezoning proposal. Council members may take it into consideration while making their decision.

There’s also an online petition that has gotten about 1,300 signatures as of Thursday morning.

Amanda Marshall, the general manager of neighboring restaurant and bar Schultz & Dooley’s Pub, signed a petition because she is concerned about how change might impact customer traffic.

“A lot of people stop by before and after movies for drinks and food,” Marshall said.

Marshall is also concerned Schultz & Dooley’s alcohol license might be affected down the line.

Bob Hosmer, principal planner with the city, said any business that currently has a liquor license would be allowed to continue to serve alcohol in the vicinity of a new church.

Future liquor licenses, however, may be impacted, Hosmer said.

According to City Code, applications for new alcohol licenses within 200 feet of a church must be approved by City Council vote. The applicant must request a letter of non-protest from the majority of the board of the church.

Anna Crane is on the board of directors for the Chesterfield Village Homeowners Association.

Crane said she has reached out to more than 200 homes in the area about the rezoning proposal.

“(The planned development district) was originally designed for entertainment and to provide amenities to our community. Let’s leave it that way,” Crane said.

Changing the theater into a church would impact people’s jobs and tax revenue, Crane said, “which hurts public schools and libraries.”

“We have a lot of churches, but we only have one Palace,” Crane said.

In August, the theater changed its name from Palace Theatre to Premiere Palace and began screening new releases at a discounted price.

Warren Theatres, which operates Premiere Palace and seven other theaters in the region, has been leasing the space from property owner Dearborn Development.

Requests for comment left with Warren Theatres' Vice President of Operations Dan Gray have not been returned.

Life360 has several Springfield-area campuses and is affiliated with the Assemblies of God. Crosby said the theater would replace Life360’s previous Park Crest Campus, which is located nearby at 3581 S. Kansas Ave.

According to New Covenant Academy’s Facebook page, the location will serve as a second campus for fifth- through eighth-grade students.

When asked what the church would do if the rezoning request were denied, Crosby said: “We’re just taking it at one step at a time right now. We’ll cross that bridge if we have to when it comes.”

Hosmer said people can sign up to speak at upcoming meetings, including a Planning and Zoning Commission meeting next week.

The Planning and Zoning Commission meeting will be held in City Council Chambers in Historic City Hall at 6:30 p.m. on May 4. The commission will make a recommendation to council either in support of or opposition to the rezoning request.

City Council is expected to discuss rezoning the Premiere Palace on May 30, then vote two weeks later, according to Hosmer.