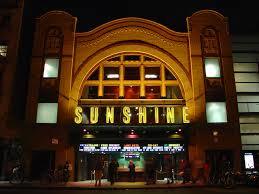 From Curbed NY: New York City is about to lose another independent cinema. Rumors have been swirling for years that Landmark’s Sunshine Cinema on East Houston Street would be redeveloped, and now, the New York Post reports that it’s a done deal. According to the paper, developers East End Capital and K Property Group closed a $31.5 million deal for the movie theater, with plans to redevelop it into “a mixed-use development with retail and upstairs office space.”

Landmark’s Sunshine Cinema opened in 2001 in a building that had served as a theater for more than a century, first for vaudeville acts and then for film screenings. But the theater has been in trouble for a few years now, and was dealt a blow in 2012 when the local community board voted against a plan that would have allowed the cinema to serve food and drinks.

While East End and K Property Group are obviously still in the early stages of developing the space, they’ve ruled out a movie theater or other sort of nightlife for the building. “We see the transition from bar and nightlife area to a live/work environment,” East End’s Jonathon Yormak told the Post.

The folks at Landmark, meanwhile, will have their hands full with a new movie theater in Midtown West—specifically, in Bjarke Ingels’s “courtscraper,” Via 57 West. As we previously reported, “the new theater will apparently have a private bar where Q&A’s and special events can be held, along with ‘unique design elements’ like a video wall and a special light display.… [and] the theaters themselves will be equipped with plush leather recliners, plenty of concessions, and laser projection screens.”

Bummer. I always liked the Sunshine and wish they’d been able to get that food/booze license.

Hello there! Would you mind if I share your blog with my sportstoto? There’s a lot of people that I think would really appreciate your content. Please let me know. Many thanks 토토사이트

This design is incredible! You most certainly know how to keep a reader entertained. Between your wit and your videos, I was almost moved to start my own blog Excellent job. 카지노사이트

This is very attention-grabbing, You are a very professional blogger. I have joined your rss feed and sit up for seeking extra of your wonderful post. Also, I have shared your site in my social networks! 파워볼

This is very eye catching, You are an exceptionally proficient blogger. I have joined your rss channel and sit in the mood for looking for extra of your superb post. Likewise, I have shared your site in my informal organizations https://truckpartsuperstore.ca/blogs/news/best-selling-automotive-accessories-of-2021

Nice content. I love how it was written. PLease check on Lead Generation Edmonton

“Safety Playground offers a variety of bonus and coupon events. It provides an advantageous betting environment that can secure betting space from the user’s point of view rather than the betting company’s point of view. We offer a variety of benefits to our members, such as a first charge bonus, a sudden charge bonus, a friend referral bonus, an all-in-payback bonus, a winning bonus, an attendance check bonus, and an attendance bonus. ”안전놀이터

“live game There are hundreds of online casinos that offer live casino games to their players. The best part is that players can enjoy the gameplay from the comfort of their own home. +F30:G30” 카지노사이트

Decent happy. I love the delightful way it was composed. Kindly keep an eye on bed bug extermination