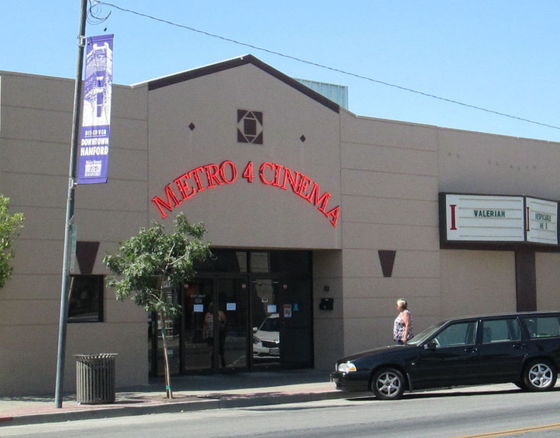 From the Hanford Sentinel: On July 31, The Metro 4 Cinemas will screen its last film.

The closing was announced on the theater’s Facebook page on Friday: “We are very sorry to be announcing that we will be closing The Metro 4 Cinemas. We’ve enjoyed serving you over the past 10 years and thank you for the loyalty you have shown.”

Some patrons of the theater may be in shock and disbelief, but signs on the doors confirm that the theater is indeed closing.

Culver Theatres opened the Metro 4 in 1983. In 2007, the owners of the building turned operations over to North American Cinemas, who gave it a $50,000 renovation that included upgraded projectors, sound and concessions.

Monday, Pauline Solario stood outside the theater before opening with a shocked look on her face.

“That’s a bummer,” Solario said, adding she’d been a patron of the theater for as long as it had been around.

Solario said she liked the theater because of the specials and bargain days the theater offered. She said the movie theater in Lemoore is pricier than Metro 4, so her only option now is visiting Cinemark Movie 8 at the Hanford Mall when she wants to catch a movie.

Esther Calonge walked up to the theater Monday and read the notice of closing in disbelief. She too had visited the theater since its opening.

To obtain the degree of Candidate of Sciences, it is necessary to write a Ph.D. thesis. The dissertation research is the help on writing a dissertation result of an independent work of a scientist, confirming a deep knowledge of the studied disciplines and having practical value for modern science.

This is a cool game and if you play it with your friends, you’ll have a lot of fun. One of my close friends working at poppy playtime told me about this game and I have played this game with him quite a few times now. It’s just awesome!