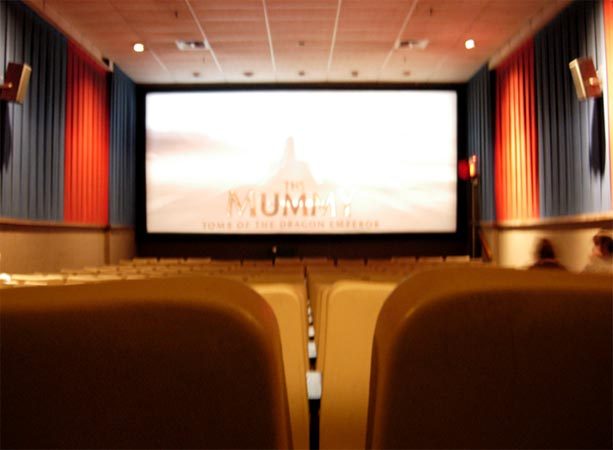 This is an interior view of one of the four theaters at the CinemaSalem complex.

videonitekatt commented about Interior view at CinemaSalem on Mar 5, 2021 at 4:47 pm

and once again, the theater is reopening after the pandemic restrictions-

It’s the theater that refused to die! (and they now have 5 screens!)

SALEM — There will be a second act for Cinema Salem after all.

Two longtime Salem residents, Marshall Strauss and Elaine Gerdine, have purchased the five-screen theater from Paul Van Ness, and with a small management team — which includes John Andrews of Creative Collective — the couple aims to reopen the much-loved independent theater later this spring and expand its cultural and artistic presence in the region.

Strauss, who stepped down last year as CEO of the Salem-based Workplace Giving Alliance, said he and his wife don’t just see this as an opportunity to save something that’s been part of the community for 40 years, but it’s also part of an ongoing cultural evolution for Salem as it rediscovers its role as a regional hub north of Boston.

“We like that and want to be part of that,” he said, explaining multiple motivations behind their acquisition of the theater, beyond a love of the arts.

In part, he said, they are both 70 now and looking to wind down their careers — his mainly in human rights and social services advocacy locally and internationally and hers in a range of arts, entertainment and communication endeavors and as a musician — but they were also ready for a new challenge.

“Elaine and I are not looking to make a serious amount of money out of this…but look at this more (like) a nonprofit,” Strauss said, noting it is still a business. “We want the community to get engaged and over time for this to become a center for art and performance as well as for film.”

Andrews shares that sentiment. He will head up community engagement and creative direction for the theater and hopes to bring in more and diverse live performances.

“We want to be a film-forward community space, but not a film-only community space,” he said. That means attracting more film festivals and ensuring the space is inclusive and welcoming to artists and audiences of diverse backgrounds — perhaps as a “cool maker space” for creative folks in the community.

“What does independent community cinema look like post-COVID?‘ he mused. They’ve done a lot of research on this topic, Andrews said, and they’re not convinced that only screening blockbuster Hollywood films is a successful business model anymore.

The community theater, located in the Witch City Mall downtown, has been closed for nearly a year, after all the state’s movie theaters were forced to close last March amid the early stages of the coronavirus pandemic.

In November 2019, Van Ness, who had run the theater for 14 years, announced he intended to sell the theater and focus on his film production business, Van Ness Creative, in Beverly. Cinema Salem is a tenant at the mall, and he was looking for a new owner to purchase the equipment and assume the remaining two years of the lease.

But Van Ness told The Salem News last June that two prospective deals to sell the theater had fallen through due to the economic impact of the pandemic and the theater would not reopen.

By late September, Strauss and Gerdine had an agreement with Van Ness and the mall management to take over Cinema Salem. They officially took occupancy Oct. 1, Strauss said, but remained closed because of the pandemic.

He explained they first submitted a bid last January — in fact, Andrews had also made a separate offer for the theater — but Van Ness informed them they were the runner-up. They revised their proposal over the summer, teaming up this time with Andrews, after the other deal fell through.

Strauss said they acquired the Cinema Salem name and various assets — like the website URL, social media accounts and physical equipment, except for the projectors — and created their own firm, Gerdine-Strauss LLC.

He declined to disclose the exact purchase price, but said it was less than the $125,000 Van Ness had sought initially. He also credited mall owner Brett Marley with being very flexible on the lease terms amid the ongoing pandemic.

When audiences return to the theater later this year, they’ll find a spruced up lobby — these renovations include replacing carpets, painting and some deep cleaning. But there will be another significant change that’s not so visible — the digital film projectors.

Strauss said they spent $125,000 to purchase new projectors to avoid any restrictions on the types of films they can show.

He explained that Van Ness converted to digital projectors several years ago, as the industry moved away from 35mm film, through a long-term lease with Sony Pictures. This was a common arrangement between big studios and small cinemas at the time, he said, but it came with constraints from the studios that prioritized showing first-run films over other content, such as arthouse movies or live performances.

Now, there will be a more expansive film library, as Jonathan Kieran heads up film curation and programming. Kieran is a Danvers native who has been down in New Orleans for the past decade, first as a student and then helping run the New Orleans Film Festival. Peter Horne will also stay on as general manager of the theater.

Strauss and Gerdine had a prior “arms-length knowledge” of the film industry — she’s actually produced two children’s operas and he was CEO of a human rights organization that produced 20 documentaries broadcast in Russia in the 1990s. But his past year has been a big learning curve, he said. Strauss also serves on the Salem Pantry board of directors and is a past board member at Historic Salem and the Plummer Home.

They hope for a grand reopening by late spring, but first, they want to say thanks to local service organizations and others who have been working hard on the front lines of the pandemic. A Celebration of Service will run for April and May, during which time nonprofits can sign up for a three-hour slot for their group, bring a DVD or Blu-ray with them, and the theater staff will provide the popcorn and soda — all at no charge.

“It’s just to give back to people who have worked really hard through the crisis and could use some hope,” said Andrews. The event will also act as a test run for getting audiences back inside.

State COVID-19 regulations allow movie theaters to be open now, but the capacity restrictions don’t make it feasible to operate on just showing first-run films, Andrews explained. If Massachusetts moves into Phase 4 later this month as the governor has indicated, then the theater could increase to 50% capacity, which could change things.

“Just like everyone else, we want to feel out the rest of COVID…and be sensitive to restrictions,” Andrews said.

An online survey posted last week to gauge interest and feedback on reopening the theater has already drawn nearly 2,000 responses. Andrews said there are well over 1,000 comments from folks talking about the special place Cinema Salem has been to them over the years and its importance in the city and North Shore. The survey included questions on COVID-19 safety concerns, as well as programs people might like to see at the theater.

Van Ness wasn’t available for comment, but in a prior interview had expressed bittersweet sentiments about closing the theater for good.

He said that while closing was sad, it had been a “profoundly joyful experience” running the theater and making personal connections with “hundreds of great people in the North Shore community,” as well as becoming more aware of the rich local arts and culture scene.

A theater first opened at the mall in 1982 as a Sack Cinema and has operated under various owners, including USA Cinemas, Lowes, Patriot Cinemas, and the independent Salem Flick, according to the website Cinema Treasures.