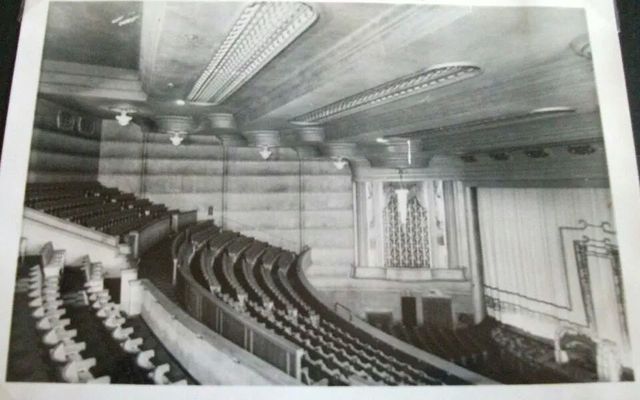 Shot of the auditorium taken from the circle towards the stage with Wurlitzer in situ.This is the auditorium as I remember it including the original art deco lights which were removed in the mid 1960’s and replaced with modern starburst style ceiling lights common throughout ABC houses. The splay wall grills were not organ grilles as the Wurlitzer pipe chambers were below the stage apron and the sound shutters were at floor level either side of the console. The auditorium was decorated in pastel shades of apricot,peach,pink and grey. The art deco chandeliers in front of the splay wall grilles were made of opaque apricot coloured glass. Sadly the auditorium was butchered in the tripling totally destroying all of the art deco styling. The only remnants were 2 decorative ventilation grilles in the ceiling of the rear circle which became the new projection room for the 3 screen operation.