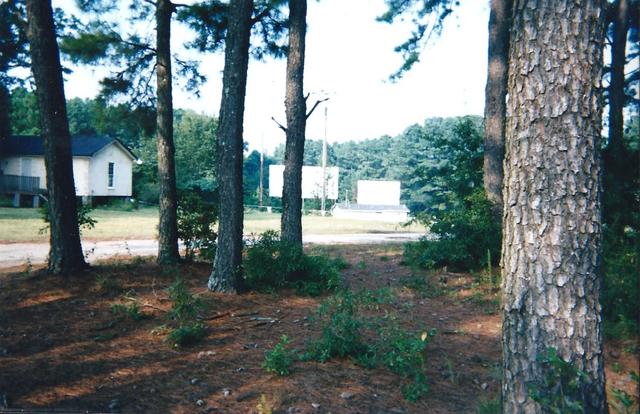 Another example of GREED, who could watch a movie with another one almost running right next to it, a third screen is on the left, the white building was the projection booth, screen made cheaply out of PLYWOOD.hold maybe 30 cards.

Boy this place brings back great memories & I don’t understand the internet Troll’s postings of negative unsubstantiated comments, about this fine place – Heck we miss it to this day !

This was a really cool drive in and we enjoyed all 3 screens ! I Guess you just had to go there and know the place & the fine crew that operated it to appreciate it .

I know the former owner/operator Mr. Joe Woodall & his family very well & all are all really fine upstanding people “beloved” many will say, by our community , every since they purchased the place in 1972. In addition to being an Architect of Earth Sheltered Rammed Earth & Adobe buildings ( Georgia Adobe Homes here at Commerce GA 706-363-6453 ) ; Joe Woodall was then also in the movie business (for 40 years since he was age 10 ) ! He & his family were always very friendly, and he literally brought this place back to life, from it’s 1st closing (I think that it was 1st closed in 1983, during an period of where Mr. Woodall’s Father & Uncle, leased it out to a former employee.

Joe, his wife & their close friends rebuilt everything ( I came by and helped a few times too ). Joe Woodall had a neat little car lot there, up until just after the theatre reopened & a Architectural office & building supply there too ( bldg. In the picture was the office ) , for a few years ( the family still lives on the property & operate his all Green Architectural Housing Company too ).

He reopened the original screen as I recall, on July 4th 1987 with “Ernest goes to camp” – ( I was there) & they only showed family movies during all the years his family ran it ( the latter 13 years ) and people he & his family knew, would just volunteer to work for free, just so as to hang out with them & just to be there in this positive atmosphere !

They added the two screens ( the one on the far left #3 is not seen in this photo & it was a 20‘ x 40 ‘ telephone pole & exterior grade plywood screen ( I helped put it up & it was done right & all were painted twice a year – I helped ) & the far right screen #2 was built from masonry scaffolds & exterior plywood ) , and were built in order to keep it day & date with all the big town’s cinemas. We were “Never” were bothered by the lay out , it worked for all our friends too and the radio sound system was top notch !

The bldg. in this photo was Joe’s company office & a projection room too, he built it as a stucco clad 14’ x ?wooden structure, and he relocated it from woods at the roads edge on the right of this photo, to that location for that use. The 2 screen on the right of this photo were screens #1 & #2 respectively, and they were all were open until 12-25-2000, when Harry Potter was the last film on Screen #1 & we watched it there that last weekend.

The Commerce Drive In closed due to the HWY 441 widening project , which effected every business on US 441. They actually dropped the road frontage by over 30+ ft, in front of the entrance, making it impossible to enter or operate the Drive in for the longest period I’ve ever seen and several other local businesses closed permanently too, during that period & the only reason the Commerce Drive In is not open today is because of our Jackson county government‘s stupid zoning laws – declared the property not zoned to be a Drive in theatre ( built in 1955 ) & additionally they won‘t allow any rezoning efforts tried down to the lower tax base zoning because the govt. wants to stick it to the population – now that‘s Greed – Govt. Greed.

I’m glad to still know the fine people involved in this place and to have been allowed to be a part of it’s great history. I & my family will forever miss this great drive in !